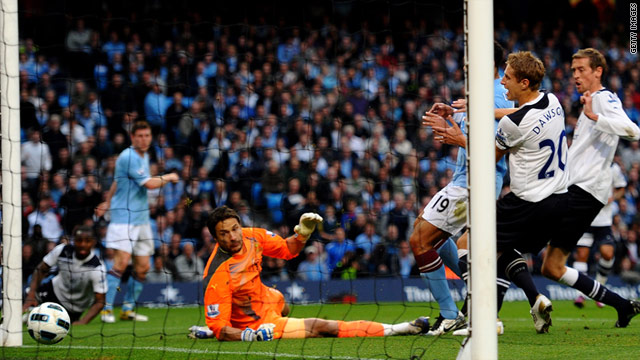 (CNN) -- Manchester City have qualified for the Champions League for the first time in their history after a Peter Crouch own goal gave them a 1-0 Premier League home win over Tottenham on Tuesday.

Crouch turned a right-wing cross from England teammate James Milner into his own net on the half hour mark for the only goal of an absorbing game.

Ironically it was Crouch who scored the only goal for Tottenham in the same fixture last year that secured the London side their place in the Champions League this season.

In a thrilling match, both sides had chances to add to the scoresheet in the first half, with Luka Modric firing just wide for Tottenham when handed a great opportunity to level.

Tottenham enjoyed plenty of second half possession and they needed England goalkeeper Joe Hart to pull off a wonder save from Steven Pienaar's header.

However, City went closest to doubling their advantage. First Patrick Vieira's chip over goalkeeper Carlo Cudicini was superbly headed off the line by William Gallas, then substitute Carlos Tevez brought a last minute save from Cudicini.

However, City can still catch third-placed Arsenal with Roberto Mancini's side only two points behind the Gunners. Only the top three qualify automatically for the Champions League, with the fourth team having to go through via a play-off match.