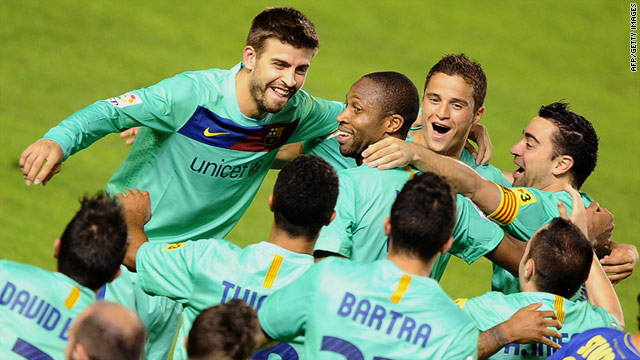 (CNN) -- Barcelona clinched a third successive Spanish league title with two matches to spare despite being held 1-1 at Levante on Wednesday.

Pep Guardiola's team went into the match needing a just a point after second-placed arch-rivals Real Madrid kept the race alive with a 4-0 win against Getafe on Tuesday.

With head-to-head records taken into account, Barca cannot be caught after beating Real 5-0 in November and drawing the second Clasico clash 1-1 last month.

"Winning the title is always difficult and this one was tough just like the others were before. Now we can enjoy this win," coach Guardiola said in quotes reported by AFP.

The fans really deserve this. I imagine we're going to celebrate this title win with them tonight in the streets of Barcelona
--Midfielder Xavi
RELATED TOPICS

"We were fantastic for the first three quarters of the league and in the final quarter the goals dried up. If we have dropped our standards at the end of the season it is simply because the team has barely stopped for the past two seasons.

"It was difficult coming off the back of the World Cup. Nine Barcelona players won the World Cup (with Spain) and I didn't know how they were going to react. The attitude of all the players has been fantastic and the title is for them."

The Champions League finalists looked to be cruising to a 30th victory in 36 La Liga outings when Seydou Keita headed Barca in front after 28 minutes.

The Ivory Coast midfielder stole in unmarked to nod home a lofted through-ball from influential midfielder Xavi to score his sixth goal this season.

But Felipe Caicedo pounced on a defensive error to equalize four minutes before halftime, slotting into the empty net after Gerard Pique missed his attempted clearance to leave goalkeeper Victor Valdes stranded.

Lionel Messi almost netted his 32nd league goal this season in the 58th minute after a trademark solo run saw him squeeze past four players, but the two-time world player of the year's low shot rebounded to safety off the inside of the post.

"It's always a nice feeling to win the title and the fans really deserve this," Xavi said. "I imagine we're going to celebrate this title win with them tonight in the streets of Barcelona."

The draw was enough to seal Barcelona's 21st Spanish title, 10 behind Real's all-time record, but it means the club cannot reach 100 points this season -- having 92 now.

The Catalan side's achievement was founded on a superb first half of the season, with 17 wins and a draw despite a shock second-round defeat by promoted Hercules.

Barca went 31 games undefeated, one short of Real Sociedad's record, with 16 successive victories from round seven.

While Messi has grabbed the headlines with 52 goals in all competitions, Barca's all-attacking style has seen 22 players hit the net in a total of 92 scored -- with only 20 conceded.

Valencia failed to clinch third place and an automatic Champions League spot after drawing 2-2 at Espanyol, but have a five-point lead over Villarreal.

Villarreal will also be in Europe's top club competition next season but may have to play in the final qualifying round, having sealed fourth place with a 0-0 draw at relegated Almeria.

Sevilla had the chance to move up to fifth and into the leading Europa League position by winning at Osasuna in the late match, but crashed to a 3-2 defeat and stayed two points behind Athletic Bilbao.

Striker Alvaro Negredo headed two goals in three first-half minutes for Sevilla before Kike Sola equalized with a double of his own, the second coming in the 87th minute.

Substitute Dejan Lekic then scored the winner two minutes later to lift Osasuna five points clear of the danger zone, while Sevilla had midfielder Gary Medel sent off for a second booking.

Second-bottom Hercules will return to the Segunda Division after a 1-1 draw with Mallorca, who came from two goals down to move four points clear of Zaragoza in the final relegation place.