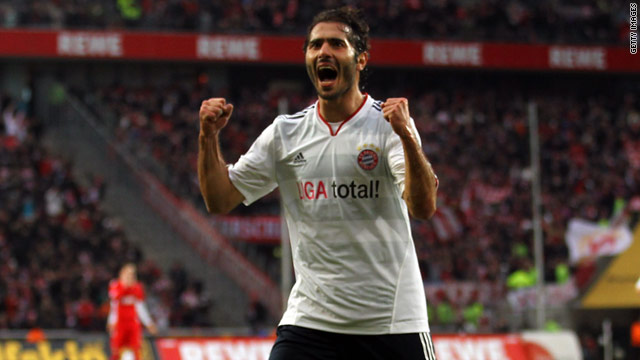 Hamit Altintop will leave Bayern Munich at the end of the season after four years with the Bavarian giants.
STORY HIGHLIGHTS

(CNN) -- Bayern Munich have confirmed that Turkish international Hamit Altintop is one of three players who will leave the club after Saturday's final Bundesliga match of the season against Stuttgart.

Former Schalke midfielder Altintop, defensive midfielder Andreas Ottl and reserve goalkeeper Thomas Kraft are the trio who will be moving on during the close season, with the club marking their farewell with a bouquet of flowers after the game.

Altintop, 28, joined Bayern in 2007 and was a member of the domestic double winning sides of 2008 and 2010, also featuring in the 2010 Champions League final defeat by Inter Milan.

However, his time at the club was restricted by injuries, restricting him to just 63 Bundesliga appearances in four seasons.

"This season, Hamit only played three games from the start. He feels that's not enough, and we understand and respect his decision," Bayern chairman Karl- Heinz Rummenigge told the club's official website.

This season, Hamit only played three games from the start. He feels that's not enough
--Karl-Heinz Rummenigge
RELATED TOPICS

It is unclear where Altintop will play his football next season, although there have been reports linking Real Madrid with a move for the player.

Meanwhile, Ottl leaves Bayern after joining the club in 1996 aged just 11. The 26-year-old never fully established himself in the senior side, making 91 appearances and scoring five goals during his time with the Bavarian giants.

A valuable squad member, Ottl has won three Bundesliga titles and three German Cups during his time with Bayern.

Meanwhile, Kraft has decided to leave Bayern in search of regular first team football, and has agreed a deal to join Bundesliga newcomers Hertha Berlin for next season.

Director of sport Christian Nerlinger said of the 21-year-old: "I can understand that Thomas Kraft's aim is to be a first-choice goalkeeper, but we could not give him that guarantee."