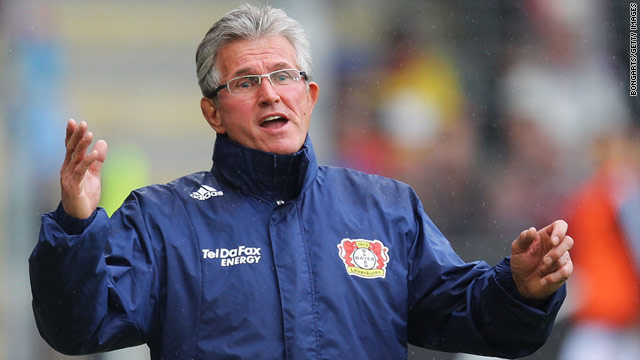 (CNN) -- Jupp Heynckes ensured his job at Bayern Munich will be a little bit harder after ending his two-season stint at Bayer Leverkusen on a winning note on Saturday.

Leverkusen needed a point in the final match of the Bundesliga season at Freiburg to clinch second place ahead of Bayern and condemn the defending champions to the qualifying rounds of the 2011-12 Champions League.

The Bavarians kept up the pressure to the last, beating Stuttgart 2-1 under caretaker coach Andries Jonker, but Leverkusen secured automatic European qualification with a 1-0 victory.

Freiburg, coached by Heynckes' imminent successor Robin Dutt, finished in ninth place after losing to a deflected goal just before halftime as Cedric Makiadi diverted Hanno Baltisch's header from Renato Augusto's corner into his own net.

It was an eventful closing round as champions Borussia Dortmund sent Eintracht Frankfurt down to the second division with a 3-1 home win, while 2009 champions Wolfsburg escaped relegation by beating Hoffenheim 3-1.

St. Pauli also went down as bottom club after losing 2-1 at fifth-placed Mainz, who had already qualified for the Europa League.

Hannover will also be playing in Europe's second-tier competition next season, finishing two points clear of Mainz after a 3-1 win over sixth-placed Nuremberg.

Borussia Monchengladbach face a relegation playoff against a second division side after drawing 1-1 draw at eighth-placed Hamburg.

Dortmund clinched a first German league title since 2002 at the end of last month, but had to come from behind against Frankfurt to ensure a proper party in front of their home fans in a match featuring two missed penalties and a red card.

Lukasz Piszczek's backheel set up Barrios for a 68th-minute equalizer, then Marco Russ put the ball into his own net soon before things got even worse for Frankfurt when Marcel Titsch-Rivero was sent off less than a minute after coming on as a substitute.

Brazilian defender Dede was given the chance to take the resulting penalty after coming on as a replacement in his farewell matched, but his 81st-minute effort was also saved.

However, Barrios sealed victory with a late header from Robert Lewandowski's cross, being the Paraguay striker's 16th goal this season.

Bayern Munich's Mario Gomez finished top of the Bundesliga scoring charts after adding his 28th this season at home to Stuttgart.

The Germany striker put Bayern level in the 37th minute after being set up by Arjen Robben as he canceled out Shinji Okazaki's opener.

Bastian Schweinsteiger headed the winner with 19 minutes to play from a cross by substitute Toni Kroos, while Gomez also hit the bar before being replaced as Bayern finished three points adrift of Leverkusen.

Heynckes led Bayern to titles in 1988-89 and the following season, and was caretaker coach after Jurgen Klinsmann was sacked in April 2009.

Wolfsburg stayed up despite Brazilian playmaker Diego walking out of the team hotel after being left out of the starting line-up by Felix Magath.

Roberto Firmino put Hoffenheim ahead early in the second half, but two goals from Mario Mandzukic gave Wolfsburg the edge and then striker Grafite unwittingly deflected in a shot by teammate Sascha Riether.

Magath's former club Schalke ended the season two points above Wolfsburg after losing 2-1 at Cologne despite a late goal from Raul.

Schalke, who reached the semifinals of the Champions League this season, will play second division Duisburg in next Saturday's German Cup final.

The Billy Goats had been under the interim control of director of sport Volker Finke, who will make way for the 43-year-old Norwegian after guiding the team to 10th place.

Promoted Kaiserslautern finished a creditable seventh after a three-goal first-half blitz set up a 3-2 win over Werder Bremen.