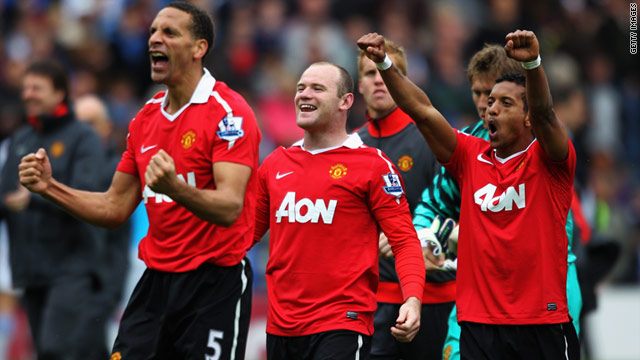 United came from behind to draw 1-1 at Blackburn, as Wayne Rooney equalized with a controversial penalty, to move past arch-rivals Liverpool in the all-time standings.

Blackburn, battling to avoid relegation, took the lead in the 20th minute through Australia international Brett Emerton and should have gone further ahead in the 65th minute when Martin Olsson headed against the post.

Five minutes later United striker Javier Hernandez went down as he tried to round Paul Robinson, with the goalkeeper making enough contact to send the Mexican tumbling.

After the year I've had, with the ups and downs, this is for the fans and the team. For me, being an Everton fan, to win a 19th title is special
--Wayne Rooney
RELATED TOPICS

Once order was restored, Dowd pointed to the spot -- to the anger of the Blackburn contingent -- and Rooney smashed his shot into the net for his 11th league goal this season.

It was particularly satisfying for the England striker, who began his career at Liverpool's city rivals Everton.

"I was terrified, the ref took a long time to give it. I had to compose myself, I'd been practicing all week," Rooney told reporters.

"After the year I've had, with the ups and downs, this is for the fans and the team. For me personally, being an Everton fan, to win a 19th title is special."

Ferguson has now won 12 championships since taking charge in 1986, when Liverpool reigned supreme with 16, and will seek to win his third European crown against Barcelona at Wembley on May 28.

"It looked like it was not going to be our day, we've always had it difficult here. It is a local derby and they are fighting for their lives, looking for that point, but we kept going and that's a good quality."

Manchester City capped a memorable week by winning England's prestigious knockout competition for the first time since 1969 and fourth in the club's 131-year history.

We need to improve but we are very happy. We made a small piece of history for Manchester City. We start now
--Roberto Mancini

City's last silverware came in the 1976 League Cup final, but the massive investment of owner Sheikh Mansour bin Zayed since the Abu Dhabi billionaire's 2008 takeover is now paying off.

Manager Roberto Mancini guided City into Europe's premier club competition, the Champions League, for the first time with a 1-0 victory over Tottenham on Tuesday.

Due to that achievement, Stoke will also be playing in Europe next season in the second-tier Europa League.

"I can say only that I'm very happy for all the supporters," Mancini said. "After many years they deserve to win this trophy. I didn't feel we dominated this game.

"We need to improve but we are very happy. We made a small piece of history for Manchester City. We start now."

City's last appearance in the FA Cup final ended in a replay defeat by Tottenham, widely considered one of the best matches in the tournament's 140-year history, but a goal from semifinal hero Yaya Toure was enough to deny Stoke a fairytale finish in the club's first such outing.

The Ivory Coast midfielder, who ended United's treble hopes with the only goal of the semi, lashed home a shot in the 74th minute as Stoke scrambled to clear a slew of City attempts.

"The dream is now. It's fantastic to win. It's fantastic for the history of the club," Toure said. "We wanted to win something and get through to the Champions League. It's amazing."

One of the key figures in the build-up to the goal was Italy striker Mario Balotelli, who had earlier produced a superb save from Stoke goalkeeper Thomas Sorensen.

In Saturday's other Premier League matches, Blackpool remained in the relegation zone despite a thrilling 4-3 victory at home to ninth-placed Bolton.

Bolton led in the sixth minute through striker Kevin Davies but the home side took a 3-2 halftime lead through a double by D.J. Campbell either side of Jason Puncheon's 19th-minute goal.

In-form loan striker Daniel Sturridge leveled the score eight minutes after the break, but captain Charlie Adam earned a vital win 10 minutes later to leave Blackpool behind Birmingham on goal difference, with both clubs on 39 points.

Wolverhampton joined Blackburn on 40 points with a 3-1 win at 13th-placed Sunderland, who guaranteed another season in the top flight last weekend.

Second-half goals from striker Steven Fletcher and George Elokobi clinched a memorable win for Wolves manager Mick McCarthy at his old club -- where he failed to win a home Premier League game in 19 attempts.

West Brom moved up to 10th place with a 1-0 win at home to Everton, who will seek to retain seventh in the final round.

Youssouf Mulumbu scored the only goal in the 10th minute, while Everton had Russian substitute Diniyar Bilyaletdinov sent off for a late tackle in the 77th.

On Sunday, third-placed Arsenal host Aston Villa, while Tottenham visit Liverpool in a match that should determine fifth and a place in the Europa League next year.

Birmingham travel to mid-table Fulham, and Wigan host West Ham in a battle of the bottom two teams.