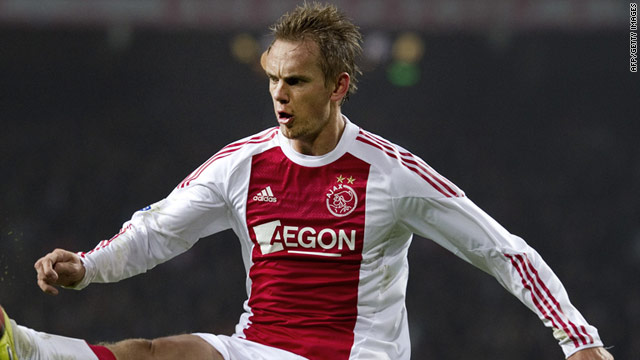 (CNN) -- Ajax won the Dutch league title for the first time in seven years after overhauling previous leaders Twente in Sunday's final match of the season.

Twente beat Ajax in last weekend's Dutch Cup final and, as they did then, the visitors again went 2-0 down on Sunday as midfielder Siem de Jong scored midway through the first half and Denny Landzaat headed an own-goal soon after the break.

Theo Janssen reduced the deficit, but De Jong ended Twente's hopes of another comeback victory when he sealed the match with 12 minutes to play with his 12th league goal this season -- matching the tally of his brother Luuk, who plays for Twente.

A few weeks ago, no-one considered us still in the title race, but we've won it, which makes me proud
--Ajax coach Frank de Boer
RELATED TOPICS

"I couldn't have wished for a more beautiful birthday present," De Boer, who replaced Martin Jol in December, said in quotes reported by UEFA's website.

"But it is even more beautiful for our supporters. They have had to wait so long for a new championship. Everyone in Amsterdam has been longing for that third star, and now we finally have it.

"A lot of the players are still only still 19 or 20 years old. They have never had to handle this sort of pressure before. A few weeks ago, no-one considered us still in the title race, but we've won it, which makes me proud."

Ajax won a place in the group stages of next season's Champions League, while Twente must play in the third qualifying round.

Rangers clinched a 54th Scottish title with a 5-1 hammering of Kilmarnock on Sunday as striker Kyle Lafferty scored a hat-trick in manager Walter Smith's last game in charge.

Smith, who will be replaced by his assistant Ally McCoist next season, won his ninth title in his second spell in charge.

Israel international Maor Melikson headed the only goal in the 17th minute to secure the club's 13th crown and first since 2008-09.