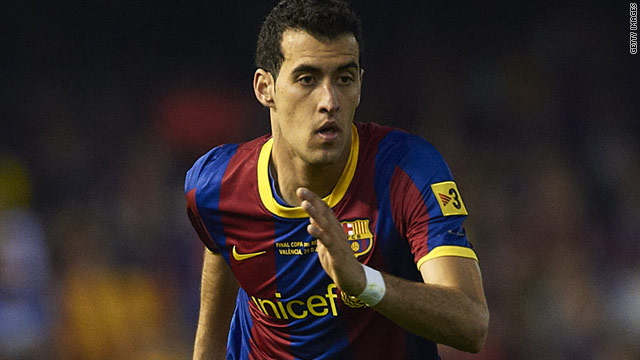 (CNN) -- Barcelona midfielder Sergio Busquets is free to play in the Champions League final against Manchester United after UEFA dismissed an allegation of racism by Real Madrid.

Real posted a video on their official web site which, they claimed, showed Busquets shouting towards Marcelo during their match at the Bernabeu. The footage was captioned "mono, mono", which means "monkey" in Spanish.

An ill-tempered semifinal that saw two players sent off and Real manager Jose Mourinho sent to the stands finished 2-0 to Spanish champions Barca, who then secured their place in the final with a 1-1 draw in the second leg at the Nou Camp.

But the European game's governing body have decided there is no "strong and convincing evidence" to impose a ban on Busquets that would have forced him to sit out the showpiece final at Wembley on May 28.

A statement on UEFA's web site read: "The report lodged by Real Madrid CF concerning racial abuse against Marcelo by FC Barcelona player Sergio Busquets has been dismissed due to a lack of strong and convincing evidence."

UEFA also confirmed they had dismissed an appeal from by Real regarding to an original complaint they had made about the behavior of Barcelona's players during the first leg in Madrid.

Real accused their rivals of "premeditated anti-sporting behavior" and claimed Barcelona's players dived and tried to influence the referee during the game.

The billion-dollar grudge match: The enormity of El Clasico

UEFA banned Mourinho for five games and fined him $71,000 after he was sent to the stands during the game for sarcastically applauding the referee and later claiming Barca's relationship with charity UNICEF meant they had too much power in football.

Meanwhile, Barcelona have announced an extension to their arrangement with UNICEF, which will see them carry the charity's logo on their shirts.

The club have had an arrangement with UNICEF, who are the world's leading organization protecting the rights of children and young people, for five years.

UEFA also announced Monday that England, Norway and Sweden will be awarded another place in the Europa League next season due to the country's standings in the Fair Play rankings.

Fulham, who are currently top of the Premier League's fair play table, are favorites to claim the English place ahead of Tottenham and Blackpool.