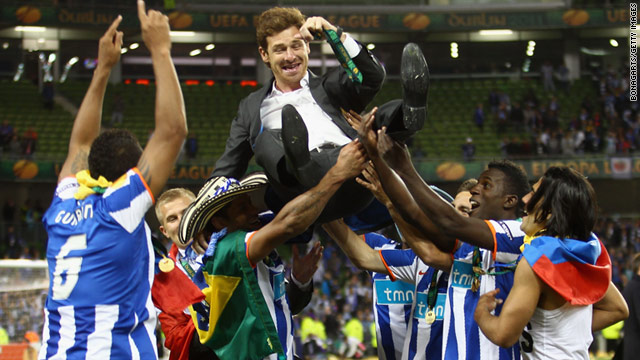 Coach Andre Villas-Boas is lifted up by his Porto players after the Portuguese club won the Europa League title.
STORY HIGHLIGHTS

(CNN) -- Porto's incredible season continued on Wednesday with a 1-0 victory in the Europa League final against Braga, giving coach Andre Villas-Boas the chance to clinch a treble in his first term in charge.

The 33-year-old became the youngest coach to win a European title, having last month clinched the Portuguese title with five matches to play before ending the domestic league season unbeaten in 30 rounds.

He was 95 days younger than previous record-holder Gianluca Vialli, who won the now defunct Cup Winners' Cup with English side Chelsea in 1998.

Villas-Boas can now emulate one of his mentors, Jose Mourinho, by winning the Portuguese Cup final against Vitoria on Sunday and claiming three trophies in one campaign.

Striker Radamel Falcao scored the only goal against Portuguese rivals Braga in Dublin, extending his record in the second-tier competition to 17. He also scored once in the qualifying rounds.

The Colombian netted for the 38th time this season, heading home Fredy Guarin's right-wing cross just before halftime as the club won the title for the second time.

It was a happy 33rd birthday for Porto captain and goalkeeper Helton, who made a vital save with his leg just after halftime from Braga substitute and fellow Brazilian Mossoro.

Villas-Boas' career came full circle in the Irish capital as he went up against the man who indirectly helped him get into football as a teenager, Braga coach Domingos Paciencia.

He wrote to former Porto coach Bobby Robson about Paciencia, who was then a striker at the club, and as a result the late Englishman took him under his wing and put him in the scouting and statistics department at the age of 16.

Mourinho, who also started out under Robson, brought Villas-Boas back to Porto from the British Virgin Islands, where as a 21-year-old he had been working as a director of football.

He followed the current Real Madrid coach to Chelsea and Inter Milan before taking a coaching job at Academica in 2009 and helping the club avoid relegation to Portugal's second division.

He has revived the club's fortunes to such an extent that the Dragons won the title by a record 21 points, with the only domestic blot being a Portuguese League Cup defeat at home to Nacional of Madeira in early January.

Braga finished fourth in the league, 38 points behind Porto, but reached the club's first European final after initially reaching the Champions League group stage before dropping down to what used to be called the UEFA Cup.

Meanwhile, Lille moved to within a point of the club's first French league title since 1954 with a 1-0 win at home to Sochaux on Wednesday.

It gave Lille a six-point advantage over second-placed Marseille with two rounds left, with Rudi Garcia's side also holding a superior goal difference.

Lille can complete a domestic double by drawing at Paris St. Germain on Saturday, having beaten that team to win the French Cup last weekend and end 56 years without a trophy.