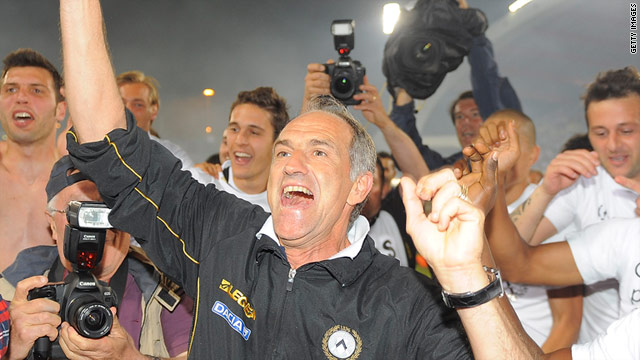 (CNN) -- Udinese claimed the fourth and final Champions League spot in Italy as a 0-0 draw at home to champions AC Milan kept them ahead of Lazio on goal difference.

Lazio beat Lecce 4-2 in their final Serie A game Sunday but still came up short.

Roma qualified for the Europa League at the expense of Juventus with a 3-1 win at home to Sampdoria.

Juve salvaged a 2-2 draw against Napoli in Luigi Del Neri's final game in charge after confirming Saturday that he would be departing after a disappointing season for the Old Lady.

They still had first half chances but after the break it was Udinese who forced the issue and Antonio Di Natale was denied by Marco Amelia's brilliant save.

They came even closer soon afterwards as Clarence Seedorf brought down Alexis Sanchez only for Amelia to tip Di Natale's penalty onto the post.

It is the second time that Udinese have reached the Champions League, the first back in 2005 and at the final whistle coach Francescoi Guidolin and his team celebrated wildly.

Roma only needed a point to hold off Juventus for sixth place but Sampdoria went ahead through Daniele Mannini after 26 minutes, only for Francesco Totti to level on the half hour mark.

Mirko Vucinic and Marco Borriello scored second half goals for Roma to seal their passage.

Juventus, who finished seventh for the second straight year, leading to the dismissal of former Sampdoria boss Del Neri, needed a last-gasp goal from Alessandro Matri to grab a late point.