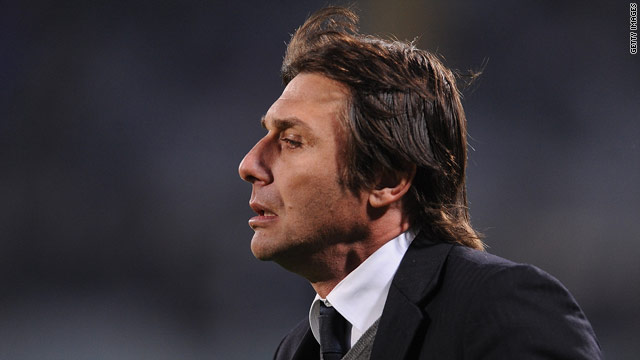 Antonio Conte will take charge of Juventus on a two-year contract.
STORY HIGHLIGHTS

The 41-year-old former Italian international has signed a two-year contract which ties him to the Turin giants until the end of June 2013.

Juve officially announced Delneri's departure on their club website earlier in the day although the 60-year-old had revealed on the final weekend of the Serie A season he would be departing.

It followed a difficult season in which the 'Old Lady' finished seventh in the standings for the second straight year and missed out on European qualification.

There's an excellent foundation with some investments made last year, there's absolutely no need to start all over
--Antonio Conte
RELATED TOPICS

Conte has a solid record as a coach, guiding Siena to promotion back to Serie A last season, a feat he had already achieved with Bari in 2009.

He believes that Juventus have the ingredients in place to enjoy success:

"There's an excellent foundation with some investments made last year, I'm very calm, there's absolutely no need to start all over," he told AFP.

"All we need to do is adjust certain things and provide great motivation and desire to a group with a great base."

Conte was a crowd favorite with the club's supporters, winning a host of titles during his 13-year playing career, including an Intercontinental Cup, the Champions League, the UEFA Cup and five Serie A titles.

"Hard work, competitiveness and drive form the basis of Conte's managerial beliefs. The same qualities that made him one of Juve's greatest ever winners," said a statement on the club's official website.

Conte's international career saw him win 20 caps and he was in the Italian squads for the 1994 World Cup and Euro 2000.