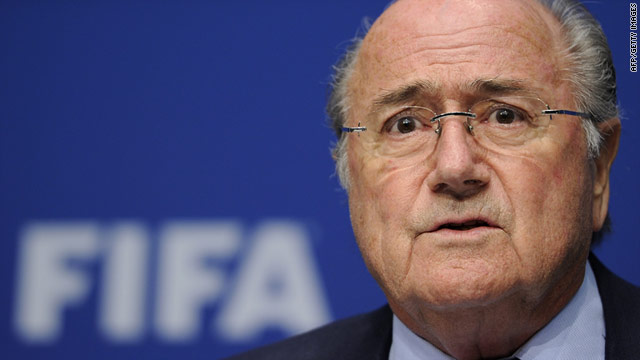 FIFA president Sepp Blatter has been widely criticized for failing to address questions about corruption at a press conference.
STORY HIGHLIGHTS

(CNN) -- Sponsors of international soccer including Visa, Coca-Cola and Adidas have warned that an ethics scandal at the highest levels of the sport is hurting the sport and needs to be fixed.

"The current situation is clearly not good for the game," a Visa spokesman told CNN Tuesday, echoing comments from other companies that pay to have their logos at the World Cup and other major soccer events. The Visa spokesman declined to be named.

"The negative tenor of the public debate around FIFA at the moment is neither good for football nor for FIFA," Adidas chief communications officer Jan Runau told CNN Tuesday.

FIFA President Sepp Blatter held an extraordinary press conference amid the scandal Monday night, insisting the organization was not in crisis after two top officials were suspended amid ethics concerns.

One of the officials, Mohamed Bin Hammam, was the only person running against Blatter for the presidency in an election scheduled for Wednesday. FIFA says the vote will go ahead on schedule, with Blatter as the only candidate.

The powerful English Football Association called on FIFA Tuesday to delay the vote.

"This has been a very damaging time for the reputation of FIFA and therefore the whole of football," FA president David Bernstein said.

"The events of the last two days, in particular, have made any election unworkable," SFA head Stewart Reagan said in a statement.

Sponsor Emirates airlines said it was "disappointed" by the "issues around the administration" of FIFA, and Coca-Cola said Monday that the ethics allegations were "distressing and bad for the sport."

The concerns come as Blatter shrugged off allegations of corruption within FIFA Monday and said he would press ahead with his bid to be re-elected as president for the fourth time.

Bin Hammam of Qatar was suspended by the FIFA ethics committee Sunday, along with fellow leading official Jack Warner.

"We are not in a crisis, we are only in some difficulties and these can be solved inside our family," Blatter told a press conference Monday where he was continually pressed on both his own position and wider allegations of wrongdoing within FIFA.

"FIFA is strong enough to deal with our own problems," he asserted when asked if he had considered postponing Wednesday's vote by the 208-member FIFA Congress.

FIFA is the body that decides where soccer's quadrennial World Cup will be held, among other responsibilities.

Blatter ruled out a new vote on the venue for the 2022 World Cup in Qatar after a suggestion that it had won unfairly.

"I believe that the decision taken for the World Cup in 2022 was done exactly in the same pattern and in the same way as the 2018 tournament."

Bin Hamman, who led the Qatar bid, said earlier Monday that he would appeal his suspension.

"I am punished before I am found guilty," Bin Hammam said in a statement, saying he would "not accept" the decision.

Blatter, who was cleared by the ethics committee, did admit that the whole affair had affected FIFA's reputation.

"What has happened in the last few days and week -- it has done great damage to the image of FIFA," he said.

The press conference was conducted in an acrimonious atmosphere as frustrated journalists shouted out questions.

"We're not in a bazaar here, we are in an important congress," retorted Blatter at one point.

It rounded off an extraordinary day of accusation and counter accusation, with CONCACAF chief Warner the focal point.

"At the end of the day, Blatter has to be stopped," Warner, whose organization covers North and Central America and the Caribbean, told gathered reporters, clearly angered by his expulsion from FIFA's executive committee.

Warner also released an e-mail to reporters which implied that FIFA general secretary Jerome Valcke believed there was corruption involved in Qatar's successful bid to host the 2022 World Cup.

"He thought he could buy FIFA as they bought the World Cup," Warner claims Valcke said of Bin Hammam in the e-mail.

Qatar's football association Monday "categorically denied any wrongdoing" in connection with its bid, and said it was consulting lawyers and "urgently seeking clarification from FIFA" about the alleged Valcke comments.

Valcke, who is not accused of ethics violations and is not under any investigation, admitted sending the email, but said his comments had been taken out of context.

In a further puzzling development Tuesday, Warner apparently performed a U-turn from his previous position and urged his region's members in an open lettter to vote for Blatter.

"At our last meeting we agreed as a Union to support the incumbent Joseph Sepp Blatter in his quest to regain the Presidency," Warner wrote.

"I wish to assure you nothing has changed - our mandate was set then and despite it all we must fulfil it."