How to rescue FIFA: A PR guide from Max Clifford 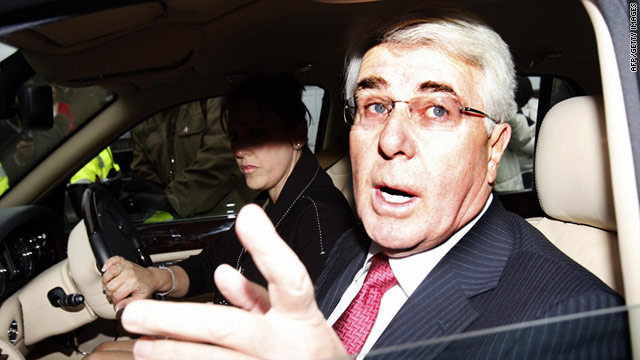 London (CNN) -- When it comes to handling bad press, there's arguably no one better than Max Clifford.

After almost six months of constant corruption allegations, and with FIFA's standing at rock bottom, CNN asked one of the world's foremost PR gurus how they would repair the battered reputation of world football's governing body.

What did you think when you watched Sepp Blatter stand and give his press conference to the world's media on Monday?

It's not difficult to see what the problem is. There's only one person that seems to matter, that seems to control FIFA, and that is Sepp Blatter. And he clearly thinks there is no problem.

'FIFA must come back to football'

His press conference was predictably incredible. In other words, I wouldn't have expected him to say anything else. If he was standing in the middle of World War Three he'd deny it was happening. Whatever you think, and whoever is responsible, FIFA is in the middle of the biggest scandal in its history. And Blatter is being criticized inside and outside football and across the world.

His performance reminded me a little of a man standing in the middle of a monsoon with just an umbrella to keep him dry. Everyone is getting washed away around him, everything is flooded, but he's fine. He's having a nice day. There's nothing wrong.

You have some experience representing unpopular clients. What would you advise Sepp Blatter in particular and FIFA in general to do to try and repair its reputation?

If I was advising FIFA what to do next, it would be very simple. You have to address the problems. FIFA has to ask: "What are these accusations? What are the best ways of finding out who is guilty and who is innocent?" If you can't answer that simple question, there's no chance. You don't call a press conference and you don't address a press conference. If you have no answers, then forget about the press conference.

And what about Blatter?

If I was advising him (which I wouldn't) I would tell him that If they want any kind of respectability, there has to be a truly independent investigation. FIFA has to prove they are being investigated by the most unbiased, incorruptible investigative team that can be convened, whether that's a body at the U.N. or someone else.

Make sure that everything, every bit of evidence, is available to every person whatsoever. Because FIFA will realize they have to prove to the world that these terrible allegations aren't true. The scandal is now too long, too deep, too wide and reaches too far.

Next: which person should run the show? If you care about your name and respectability -- and no one has any kind of respect for FIFA so it can't be an internal investigation -- it has to be someone who commands respect.

For the sake of argument: you have Henry Kissinger or Bill Clinton, even Tony Blair, someone who is a worldwide statesman working on behalf of the U.N. They have to be someone who is above suspicion, someone only interested in the whole truth who has no vested interest. They must have a team of people who are capable, credible and respected. FIFA have to throw their doors open.

So you'd advocate complete freedom of access and disclosure? That's surprising as you have a reputation for burying bad news...

I was asked by [former Nigerian leader] General Abacha to do his PR for him. I said I'd do it, fine, but I told them you have to give me totally free access to journalists [visiting Nigeria], in the towns, in the villages, in the hospitals, wherever they wanted to go. But, of course, they said they couldn't so I said no. They kept coming to London to offer me more money!

Don't get me wrong, I'm not some kind of campaigner or anything. There's plenty of things I've covered up over the years. If I'd been looking after [Manchester United footballer] Ryan Giggs I can promise you wouldn't have read about any of it. But I wouldn't do that for these people. It's too important. I'm not a moral arbiter, but this isn't a kiss and tell of no consequence to most people. It matters.

But is there the will to change it?

There's enough money in football to make sure it is worth their while, enough money to make sure that they do this properly. Depending on what they find and what they know, then they can rebuild their reputation. It's like any kind of cancer. Get right to the bottom of it, because the treatment can be painful and take a long time. A huge amount of people might be innocent and others might be guilty. But it clears a black cloud.

So the rescue package is very simple. You find out who is guilty and how widespread the cancer is, but everything has to be in the open. It has to have credibility. Who you choose is vitally important. Because then you know exactly where you are.

Would trying to revive FIFA's reputation be the hardest job in PR?

No. It certainly wouldn't be easy but it's crucially important as football plays such an important part in the lives of so many people all over the world.