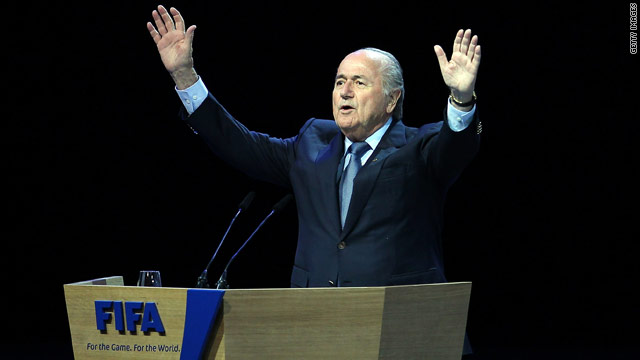 (CNN) -- Sepp Blatter has been re-elected as president of soccer's world governing body and immediately vowed to put "FIFA's ship back on the right course in clear, transparent waters."

At FIFA's Congress in Zurich, Switzerland on Wednesday, Blatter received 186 votes from football's 208 member football associations, to serve his fourth term as president despite the race becoming engulfed by corruption allegations within the organization.

Blatter's only rival for the presidency, Mohamed Bin Hammam, pulled out of the race after he was suspended by FIFA's Ethics Committee on Sunday in relation to bribery charges surrounding Qatar's successful bid for the 2022 World Cup.

After Blatter's re-election was confirmed he told Congress: "I thank you for your trust and confidence. Our pyramid is intact, the base, the foundation is strong and together we have four years to continue on our path and do our job.

"We will put FIFA's ship back on the right course in clear, transparent waters. We need some time to do it, but we shall do it.

"Today something marvelous happened and I'd simply like to tell you I'm deeply moved and honored. It's a challenge, a new one for me, and I accept it. Together we shall do it."

Was Blatter right to be defiant?

Earlier in the day, 172 of the 208 delegates voted not to delay the presidential ballot despite Blatter being the only candidate. Both the football associations of England and Scotland urged FIFA not to proceed following the suspension of Bin Hammam.

We will put the FIFA ship back into the clear and transparent waters
--Sepp Blatter, FIFA president
RELATED TOPICS

After the result was confirmed, FIFA voted through changes proposed by Blatter to alter the process they use to decide the host nations for future World Cups.

"I want to give more power to the national associations," he said. "In the future the World Cup will be decided by the FIFA Congress. The executive committee will create a shortlist -- but will make no recommendations only a list -- and the congress will decide on the venue."

Russia and Qatar were chosen for the 2018 and 2022 events -- ahead of Spain and Portugal and the United States respectively -- in a controversial vote held in December last year which saw two executive committee members suspended for breaching "ethical codes."

England missed out on the 2018 World Cup and had called for the ballot to be delayed. "This has been a very damaging time for the reputation of FIFA and therefore the whole of football," said David Bernstein, chairman of the English Football Association.

The Scottish Football Association echoed the call. "The events of the last two days, in particular, have made any election unworkable," SFA head Stewart Reagan said in a statement.

Despite Blatter's re-election, the fallout from the corruption scandal persists. He admitted that the suspension of Bin Hammam, as well as FIFA vice-president Jack Warner, had hurt his organization.

"I am the captain weathering the storm, this is a difficult period for FIFA and I admit that readily. Not only is the pyramid shaking but our ship has drawn some water.

"We must do something because I do not want ever again that we face this undignified situation."

On Wednesday, the head of the German Football Federation said FIFA's awarding of the World Cup to Qatar should be re-examined in the wake of the ethics scandal.

"Especially regarding the awarding of the World Cup 2022 to Qatar, there has been repeated speculation and corruption allegations," Theo Zwanziger said in an interview posted on the league's web site Wednesday.

"From what I am reading, I have to believe that there are substantial allegations that we cannot ignore or shove aside. And therefore I must believe that the awarding of this world cup must be re examined.

"How this is to happen is something I would only like to talk about when I know more about the facts. I am coming from the outside and was not a member of the executive back then," he added.

Zwanziger joins a growing chorus of voices critical of FIFA as the election loomed. But Zwanziger said the soccer body should not postpone Wednesday's election, a view that was shared by other powerful football organizations.

Sponsors of international soccer including Visa, Coca-Cola and Adidas have warned that the ethics scandal is hurting the sport.

"The current situation is clearly not good for the game," a Visa spokesman told CNN Tuesday, echoing comments from other companies that pay to have their logos at the World Cup and other major soccer events. The Visa spokesman declined to be named.

"The negative tenor of the public debate around FIFA at the moment is neither good for football nor for FIFA," Adidas chief communications officer Jan Runau said.

Sponsor Emirates airlines said it was "disappointed" by the "issues around the administration" of FIFA, and Coca-Cola said Monday that the ethics allegations were "distressing and bad for the sport."

The concerns came as Blatter shrugged off corruption allegations within FIFA and said he would press ahead with his bid to be re-elected.

Blatter said Monday night that the organization was not in crisis after the FIFA ethics committee suspended top officials Jack Warner and Mohamed Bin Hammam. The latter was the only contender against Blatter for the presidency.

Bin Hammam was a major influence in Qatar's surprising victory in winning the right to host the 2022 World Cup finals.

He and Warner have been accused of offering cash gifts to national associations in return for pro-Bin Hammam votes in the presidential election.

FIFA is the body that decides where soccer's quadrennial World Cup will be held, among other responsibilities.