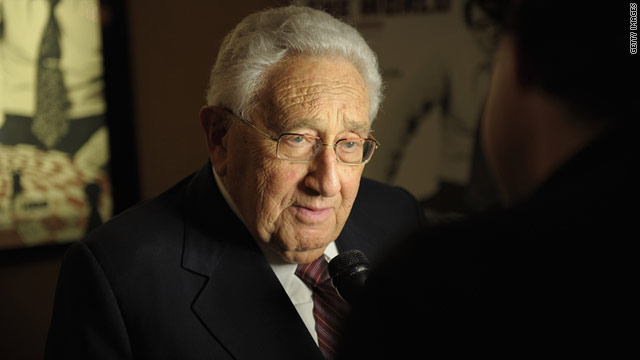 Blatter was the only candidate in Wednesday's election held in Zurich, Switzerland and was duly returned to serve another four-year term.

The ballot was held among a storm of corruption allegations against the organization which saw Blatter's only rival, Mohamed Bin Hammam, suspended by FIFA's Ethics Committee on bribery charges.

The Qatari subsequently dropped out of the presidential race.

After his re-election Blatter vowed to put "FIFA's ship back on the right course in clear, transparent waters" and former Nobel Peace prize winner Kissinger could now be approached to head up a new 'Solutions Committee'.

The Swiss also said former Dutch legend Johan Cruyff could be a part of his bid to clean up FIFA's reputation after weeks of negative headlines.

At a press conference Blatter told reporters: "This will be a commission of the wise. Kissinger loves football: he'll be part of it.

This will be a commission of the wise. Kissinger loves football: he'll be part of it
--Sepp Blatter, FIFA president
RELATED TOPICS

"And Cruyff, he's the perfect personality to help us in this solution commission."

Kissinger, 88, served under former U.S. presidents Richard Nixon and Gerald Ford and has been used in an advisory capacity by several governments since.

He attended the 2006 World Cup in Germany and is thought to be friends with the FIFA president.

Kissinger's spokeswoman Jessee Leporin was quoted by AFP as saying: "Although Dr. Kissinger has not yet received a formal request, he did receive an exploratory letter from FIFA president Blatter, inviting him to join a committee."

Blatter vowed to reform FIFA in the wake of bribery scandals that engulfed the election process. Two FIFA executive members were suspended after they allegedly sold their votes for the 2018 and 2022 World Cup.

Bin Hammam and FIFA vice-president Jack Warner were then suspended just days before the election after they were deemed to have paid bribes to officials.

Blatter himself was cleared by the Ethics Committee after it was alleged he had also offered financial incentives to FIFA delegates.

Warner then released an email from FIFA general secretary Jerome Valcke in which he claimed Qatar "bought" the 2022 World Cup. Qatar denied the claims and Valcke insisted his comments were misconstrued.

FIFA's sponsors, who contribute a large part of their financial income, Coca-Cola, Adidas, Emirates and Visa, then voiced their concern about the ongoing corruption allegations.

After Blatter's re-election FIFA voted through changes proposed by the president to alter the process they use to decide the host nations for future World Cups.

He later told a press conference in Zurich: "We have now instruments needed to restart the credibility of FIFA.

"When it comes to words from the beginning I have set the tone for this congress and I want the congress to know and to understand that we are in a situation which needs not only words as well as action in order to counter all these attacks.

"We have been hit; I have been slapped, we are [still] standing and we will no longer be slapped. We have created the necessary means to react against what we have fallen short of, so they say."