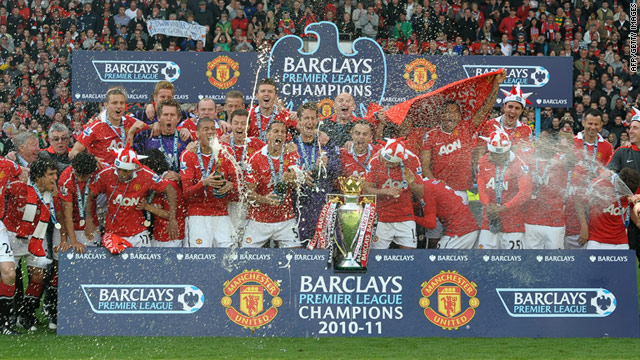 the English Premier League continue to outstrip all ther major leagues in terms of revenue and player wages.
STORY HIGHLIGHTS

(CNN) -- A new report from accountancy firm Deloitte has revealed that English Premier League wages are continuing to rise at a quicker rate than club revenues.

In publishing their 20th Annual Review of Football Finance, Deloitte also revealed that revenues broke the two billion euro barrier ($2.9 billion) in season 2009/2010, although this was offset by the fact that wages now take up 68 per cent of that revenue.

The exact figures confirmed that the Premier League continues to be the world's richest domestic league, with the 20 clubs earning 2.03 billion euros ($2.94 billion), a figure which is expected to rise to 2.2 billion euros ($3.19 billion) for the season just gone on the back of a new television deal.

"Clubs have time to make adjustments to their business plans before the new regulations are effective, as well as increased broadcast revenue from 2010/11 to help deliver a better balance between spending on players and revenue generation."

The report also confirmed that Chelsea have the largest individual wage bill, with total spending of $252 million, followed by Manchester City ($193 million) and Manchester United, who spent $191 million on players' wages in the 2009-2010 season.