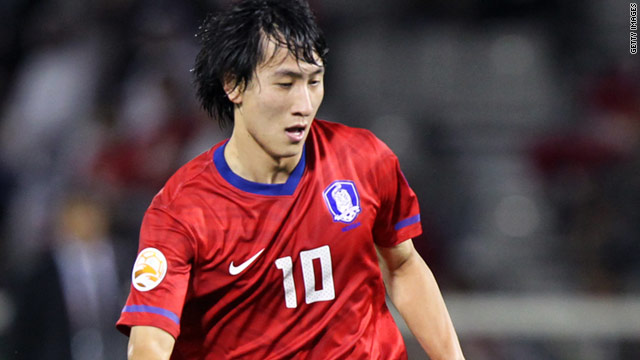 South Korea striker Ji Dong-Won will be plying his trade for Sunderland in the English Premier League next season.
STORY HIGHLIGHTS

The 20-year-old signed a three-year contract after moving from K-League club Chunnam Dragons, who are based in the South Korean city of Gwangyang.

Ji starred for his country at January's Asian Cup in Qatar, grabbing four goals to take his tally to six in 11 appearances.

He follows in the footsteps of compatriot Park Ji-Sung, who has won four Premier League titles and Europe's most prestigious club competition, the Champions League, since he joined Manchester United in 2005.

"I am so satisfied to be able to come to a good club, a nice club in the world's number one league," Ji told Sunderland's official web site.

"I am happy because I have a chance to challenge the biggest players, and that gives me motivation.

I am so satisfied to be able to come to a good club, a nice club in the world's number one league
--Ji Dong-Won
RELATED TOPICS

"As a striker, I like to overwhelm defenders. My aim is to help the team get as many points as possible. That is what will give me satisfaction."

Sunderland coach Steve Bruce said: "The boy has been in fantastic form for both club and country and he was one of South Korea's stand-out performers at the Asian Cup, so we are delighted to bring him to Sunderland.

"The Premier League is very different to the K-League, so there is hard work ahead, but you just have to look at players like Park Ji-Sung and (Bolton winger) Lee Chung-Yong to see how well Korean players are adapting to its pace and physicality."

Sunderland also announced the signing of Craig Gardner from Birmingham City, who were relegated from the Premier League last season.

Frings claimed he was persuaded to sign for Toronto by former Germany legend Jurgen Klinsmann, who acts as an advisor for the club.

"Jurgen Klinsmann telephoned me and asked me if I could imagine joining Toronto. He made me very curious," he said on his personal web site.

"It's Toronto's overall appeal which swayed me -- it's a city with a great quality of life in a super country, with A full stadium, a professional environment and a vision at the club to which I can contribute in a central role."