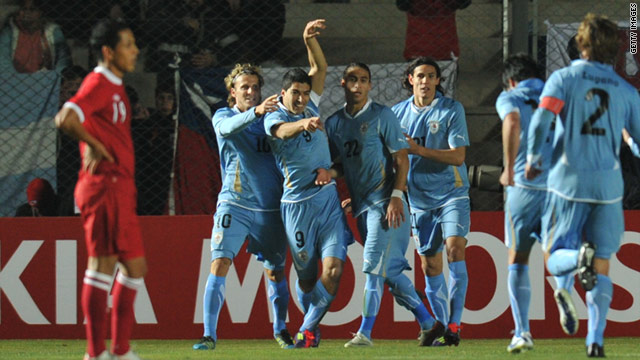 (CNN) -- Uruguay striker Luis Suarez scored in the closing moments of the first half to secure a 1-1 draw for Oscar Taberez's side against Peru in their opening match of the 2011 Copa America.

The 2010 World Cup semifinalists fell behind after 23 minutes when Hamburg's Paolo Guerrero latched onto a long ball up field before rounding Uruguay goalkeeper Fernando Muslera and rolling a low shot into the empty net.

Liverpool's Suarez leveled for the two-time world champions when he converted from inside the penalty area after being released by Ajax playmaker Nicolas Lodeiro.

Atletico Madrid forward Diego Forlan had a clear-cut opportunity to snatch all three points for Uruguay, but the 32-year-old fired his effort over the crossbar with only the goalkeeper to beat.

The result left Chile top of Group C, after they came from behind to defeat Gold Cup winners Mexico 2-1.

Nestor Araujo put Mexico into the lead after 40 minutes, when the Cruz Azul defender guided a looping header beyond Chile goalkeeper Claudio Bravo.

Claudio Borghi's side equalized through substitute Esteban Paredes with the first of two goals from corner kicks, with the striker capitalizing on confusion in the Mexico backline to poke the ball home from close range.

Bayer Leverkusen's Arturo Vidal completed the turnaround in the 73rd minute with a powerful header from another set piece.

All four teams will be back in action on Friday, when Uruguay face Chile and Mexico go head-to-head with Peru.