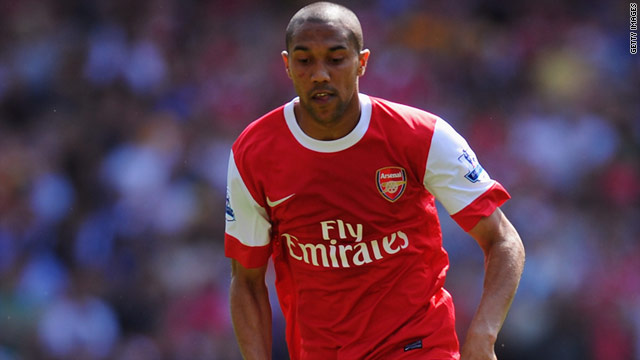 Clichy was in the Arsenal the squad the last time they won a trophy, when they beat Manchester United in the 2005 FA Cup final.
STORY HIGHLIGHTS

(CNN) -- Gael Clichy has become Manchester City's first signing of the transfer window after the French international defender completed his switch from Arsenal.

Clichy, 25, will cost Roberto Mancini's side $11.2 million and has signed a four-year contract at the City of Manchester Stadium.

The former Cannes left-back spent eight years with Arsenal and becomes the final member of Arsenal's "invincibles" -- the team of 2003/04 who won the English Premier League without losing a game -- to leave the Emirates Stadium.

"I hope I can add to the quality we already have here because we have a fantastic squad who I believe will continue to get better. I can't wait to get started and I think anything is possible with this team."

As a member of the Gunners' last title-winning squad, Clichy became the youngest player to receive a Premier League title medal and his compatriot and former manager Arsene Wenger thanked him for his services.

"We would like to thank Gael for eight years of terrific service to Arsenal, during which time he gave absolutely everything for the club ...Gael leaves with our respect and best wishes. We wish him the very best for his future career."

Clichy will be reunited with former teammates Kolo Toure and Patrick Vieira at City, and the Toulouse native is looking forward to working with his old friends.

"When I first came to England, it was Kolo Toure and Patrick Vieira who took me under their wing and really looked after me.

"Kolo would pick me up and drop me at home and his wife used to cook meals for me. Patrick was always there to offer me advice so it's wonderful to be back and at the same club they are at."

Clichy has won 10 international caps for Les Bleus and was a member of the France squad which was eliminated from the 2010 World Cup in the opening round.

Clichy made 45 appearances in Europe's premier club competition during his time with Arsenal.