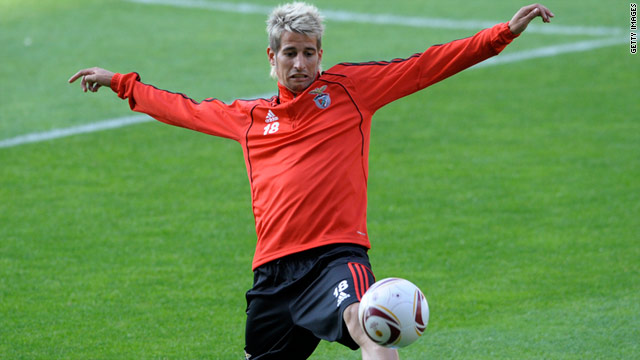 Fabio Coentrao was part of the Portugal team which reached the last 16 of the 2010 World Cup.
STORY HIGHLIGHTS

(CNN) -- Real Madrid confirmed the signing of Fabio Coentrao from Benfica on Tuesday, with the Portugal international signing a six-year deal.

The 23-year-old defender is the fifth new signing to arrive at the Bernabeu since the off-season transfer window opened with the culmination of the most recent league campaign.

The left-back, who was one of his country's stand-out performers at the 2010 World Cup, said it was a dream come true to join the nine-time European champions.

"I wanted to since I was a child. I used to imagine playing for this team. It was my dream and it has now come true. I hope to earn continuity and to show people I'm ready to play here."

The move will see Coentrao link up with his compatriot Jose Mourinho, the head coach who led Los Blancos to second place in the Spanish First Division last season.

"He is the best coach in the world," Coentrao said of the former Chelsea and Inter Milan boss. "It makes me proud to have the chance to work with him."

Coentrao, who previously played in Spain during a loan spell with Real Zaragoza in 2008, has played for Portugal on 12 occasions since making his debut in 2009.

Winger Jose Callejon has arrived from Espanyol and young French defender Raphael Varane has been signed from Lens.

The 20-year-old joins the City of Manchester Stadium outfit from Partizan Belgrade on a four-year contract.

The center-back faced a number of his new teammates during Montenegro's 0-0 draw with England in October 2010, and is looking forward to working with so many international players.

"I never imagined that I'd be teammates with all those City players within a year and I'm so happy to be at this club," Savic told City's web site.

"I watch the Premier League all the time and I know it's the place to be so I am just looking forward to helping this club achieve great things. We have an incredible stadium and I've seen how passionate the City fans are many times on TV.

"Montenegro play England later this year so I'm expecting to have some great banter with the England lads. I'm just really happy to be a City player."

There was also transfer activity at Inter Milan on Wednesday, as they agreed a deal with Argentine team Velez Sarsfield for attacker Ricardo Alvarez.

Inter have agreed to pay $17m for 90% of the 23-year-old's contract with an option to purchase the remaining 10% at a later date, according to Velez's web site.

The 29-year-old former Atletico Madrid winger has signed a three-year contract at Ibrox.