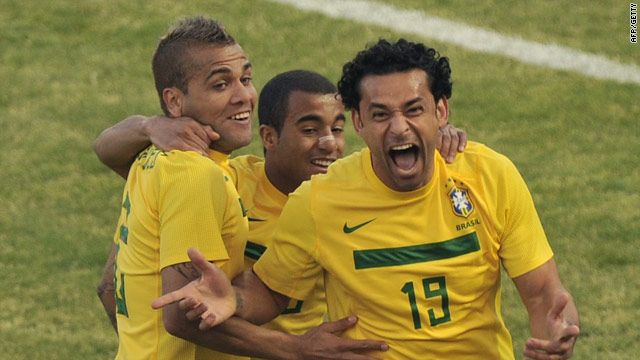 (CNN) -- Holders Brazil needed a last-gasp equalizer from Fred to salvage a 2-2 draw against Paraguay in their Copa America Group B match Saturday in Cordoba.

It was another lackluster performance from the five-time world champions after being held to a goalless draw by Venezuela in the opening match of their title defense.

They took a first half lead through Jadson, but trailed 2-1 with only a minute left when substitute Fred spared their blushes.

Jadson replaced Robinho in the starting line up as Brazil coach Mano Menezes rung the changes after the disappointing performance against Venezuela.

The Shakhtar Donetsk midfielder repaid that confidence with a fine strike six minutes before halftime in the Mario Kempes stadium.

But Paraguay, themselves held by Ecuador in their opener, leveled 11 minutes into the second half through Blackburn striker Roque Santa Cruz.

Paraguay then took a shock lead with Dani Alvez losing the ball to Santa Cruz, who found Haedo Valdez.

He scored with a deflected shot and a real upset looked on the cards.

But Menezes replaced Neymar with Fred and he struck at the death to grab a point for the favorites.

The start of the 12-team tournament has been marked by sub-par displays from hosts Argentina and Brazil, with both still looking for a victory after two games apiece.

The top two teams from each of three groups of four qualify for the quarterfinals with the two third-placed teams with the best record.

Venezuela beat Ecuador 1-0 in the Group B match Saturday night.