By Benjamin Gottlieb, for CNN 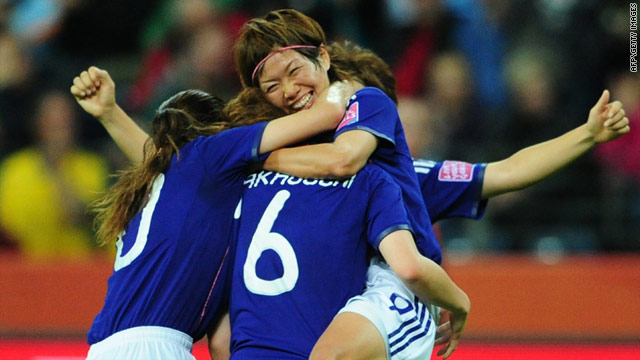 Hong Kong (CNN) -- Japan women's national football team will square off against favorites the United States Sunday in their first appearance in a World Cup final.

Regardless of the result, Japan's surprise progress in Germany is a much-needed boost for a country recently devastated by massive tremors and a subsequent tsunami.

It is also putting women's sport in the shop window like never before.

"This is a breath of fresh air, because everything out of Japan has been negative over the last few months," said Tom Byer, a youth soccer instructor in Japan for over 25 years and former soccer instructor of starter Aya Miyama.

"Now, you turn on every channel and there are big segments about women's soccer... it's huge for women's sports here."

Known as Nadeshiko -- or beautiful flower in Japanese -- the women's national team has been the underdog throughout this year's tournament.

They are unlikely to relinquish this role in Sunday's final in Frankfurt, with a star-studded and battle tested U.S. squad -- which took home the cup in 1991 and 1999 -- standing in their way.

But what many people may not know, Byer said, is that the Japanese squad has enjoyed a high level of success on the international scene over the last 20 years.

In addition to their fourth-place showing at the 2008 Beijing Olympics, Nadeshiko has appeared in each of the six women's World Cups since 1991, and are coming off a recent win at the 2010 Asia Games held in Guangzhou, China.

Yet their success has not had a significant impact on the women's game generally in Japan.

"It wasn't until five or six years ago that the Japanese Football Association (JFA) got together and decided to put more resources behind women's soccer."

In Japan, you play 365 days a year and you play only one sport. And you train and train until you fall down.
--Tom Byer
RELATED TOPICS

He added that recent success from Japan's national team has not increased the number of young girls interested in playing organized soccer. There are just 25,000 girls registered to play youth soccer in Japan, a country of more than 125 million people, Byer said.

This compares to around 200,000 girls registered with the American Youth Soccer Organization in the U.S. State of California alone.

So why are Japanese women enjoying such a successful period?

"It's not like New York, where you play soccer from the summertime until Thanksgiving," Byer said. "In Japan, you play 365 days a year and you play only one sport. And you train and train until you fall down."

But the culture of sport in Japan is far different that in the U.S., Byer said.

Women's youth soccer in the U.S., especially for girls under 12, is "purely recreational," he said. In Japan "they are already trying to find who can be on the national team at the age of 12."

Watching the final game? Send us video of your viewing parties.

Unlike the U.S. Women's Professional Soccer League, Japan's L. League is non-professional. In fact, many of the league's players work normal day jobs to pay their bills.

"Aya [Miyama] and some of the other players from the team are from Mimasaka, a hot spring town. A lot of those women work in the hot spring resort hotels during the day, after the job they go and train," said Byer.

Andrew McKirdy, a sports writer for the Japan Times, an English language newspaper in Japan, said the success of the women's national soccer team has reinvigorated a nation plagued by recent tragedy.

"The women take a lot of pride in the fact that everything is staked against them," he said. "Looking at Germany and Sweden -- the last two teams they beat -- those teams are among the best in the world...that is a source of inspiration for the country."

The time difference with Germany has made watching this year's World Cup difficult for many Japanese fans, and the final match -- broadcast at 3:15 a.m. in Japan -- is no different.

Nonetheless, diehard Nadeshiko fans are expected to crowd Tokyo's sports bars, cheering on their ladies as they reach for history.

"I'm so happy. I was moved very much that Nadeshiko Japan played such a great game," one Japanese male fan told CNN, following the team's semifinals win against Sweden. "I want Nadeshiko to let us dream again at the final game."

For Byer, a Bronx-native, the outcome of Sunday's U.S.-Japan final is less important than the buzz Nadeshiko has already generated in Japan about women's sport.

"It's going to lift the whole nation if they win the World Cup," Byer said. "Even if they don't, the fact that they got to the final has had a residual effect in Japan... winning it would just be the icing on the cake."

CNN's Junko Ogura and Kotoe Oshima contributed to this report.