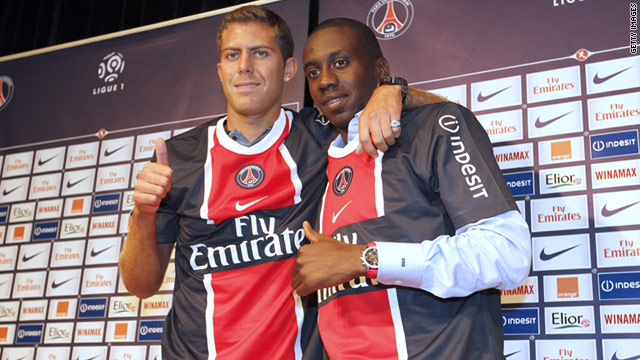 The French club also announced the arrival of Serbia defender Milan Bisevac, who like Menez and Matuidi has joined on a three-year contract.

Winger Menez spent three years in Italy after leaving Monaco, while defensive midfielder Matuidi has spent all his career in France, having started out at Troyes.

The 24-year-old pair both made their debuts for Laurent Blanc's France team in 2010, with Menez gaining his first cap in a friendly against Norway in August and Matuidi making his international bow against Bosnia and Herzegovina in September.

Bisevac, 27, has moved to the Parc des Princes from Valenciennes -- becoming the club's third acquisition since the takeover by a Qatari investment group was completed and former Inter Milan coach Leonardo was installed as sporting director in July.

Several players have departed since the club finished fourth in Ligue 1 last term, including experienced international midfielders Ludovic Giuly, who was released, and the retired Claude Makelele.

The France winger also made his international breakthrough in last year's clash with Norway, and the 25-year-old will now discuss personal terms with the Birmingham-based team.

"The club are pleased to confirm that we have agreed a fee with Wigan for French international winger Charles N'Zogbia," read a statement on Villa's official website.

"We will now discuss personal terms with the player and arrange a medical, with a view to completing the transfer later this week."

N'Zogbia joined Wigan from Newcastle United in 2009 and scored nine goals for the Latics last season as they avoided relegation from England's top division on the final day.

If the transfer is completed, N'Zogbia will become Villa manager Alex McLeish's second signing of the offseason following the arrival of former Newcastle goalkeeper Shay Given from Manchester City.

Kasami, 19, was part of the Switzerland team which reached the final of last month's European Under-21 Championship, losing 2-0 to Spain, and has signed a four-year contract at Craven Cottage.

Czech Republic under-21 international defender Ondrej Celustka, who also played at the tournament in Denmark, has joined Turkish first division side Trabzonspor.

Celustka, 22, agreed a five-year-deal according to his former club Slavia Prague.