NFL optimistic lockout will end as players meet over deal 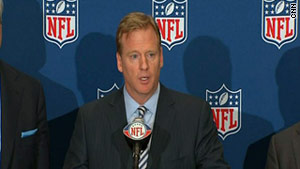 NFL commissioner Roger Goodell said it's "time to get back to football," but that can't happen until the players vote.
STORY HIGHLIGHTS
RELATED TOPICS

Washington (CNN) -- An end to the NFL lockout may be imminent, as a committee of league players is scheduled to meet Monday in Washington to consider an offer by club owners.

A larger group of player representatives is on standby in case the 13-man executive committee votes on the deal, the NFL said Sunday on its website.

If accepted, the deal would end the lockout that started in March.

"The deal is almost done," the NFL quoted Saints quarterback Drew Brees as saying in an e-mail to his teammates.

"It is expected that we will approve the deal as well as our Board of Reps and lead plaintiffs, and then have a press conference to announce that sometime during the day on Monday."

Brees is one of 10 NFL players who filed an antitrust lawsuit against the league over the lockout.

National Football League owners approved a 10-year labor and revenue-sharing agreement with players Thursday, who later that day discussed key elements but did not vote on it.

Owners, who met in Atlanta, agreed by a 31-0 vote to end the current lockout.

"It is time to get back to football," NFL commissioner Roger Goodell said. "That's what everybody here wants to do."

But one player indicated the representatives were not satisfied with the proposed deal.

New Orleans Saints player Heath Evans, referring to the collective-bargaining agreement, tweeted: "The owners tried 2 slip many things n2 the CBA 'they' voted on that were NEVER agreed 2!"

Representatives for owners and players communicated again over the weekend, which led players to call for Monday's meeting of their executive committee, according to the NFL.

Both sides discussed details players wanted resolved in the agreement. They included the contractual handling of player injury, an opt-out clause in the 10-year deal and "most pointedly, the potential timeline for the recertification of the NFLPA (NFL Players' Association) as a union," the NFL said.

No longer a union, the NFLPA's website is not accessible. Instead its web address leads to an error page, which includes a forwarding link to a website on lockout.

The proposed collective-bargaining agreement with 1,900 players would last through the 2020 season.

An originally proposed agreement included a new rookie compensation system, a salary cap of $142.4 million per club in 2011 and additional retirement benefits, according to the NFL.

In a bid to reduce injuries, the pact limited practice times and full-contact practices. Clubs were to receive credit for actual stadium investment and up to 1.5% of revenue each year.

Current players could remain in the player medical plan for life, under the owners' plan. They also would have enhanced injury protection benefit of up to $1 million of a player's salary for the year after his injury and up to $500,000 in the second year after his injury.

If players accept the deal Monday, free-agent signing could begin this week, and the four-week preseason could go forward with only one hitch, according to the NFL.

The first preseason game -- the annual Pro Football Hall of Fame Game, between the Chicago Bears and St. Louis Rams -- was canceled because of the delay in opening camps, Goodell said. It had been scheduled for August 7.

The owners call for the free-agent signing period to begin this week.

The league's owners imposed the lockout on March 11, suspending the labor deal in place at the time in hopes of creating a new financial structure.

In addition to Brees, Players Tom Brady, Peyton Manning and seven others subsequently filed an antitrust lawsuit against the league on behalf of other current and eligible NFL athletes.

Since the lockout, the two sides have faced off in courts and around conference tables. The major issues have revolved around how to divide the billions of dollars of revenue reaped via the league each year, rules of free agency, a possible rookie wage scale, retirement benefits and a host of other matters.

The heart of the issue between the players and the owners was how to divide the league's $9 billion in revenue.

The owners said the old labor deal didn't take into account the rising costs related to building stadiums and promoting the game.

The players argued that the league has not sufficiently opened up its books to prove this.