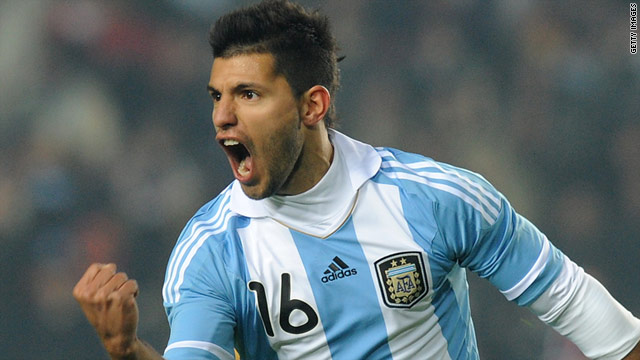 The 23-year-old said on his official Twitter account that he had put the finishing touches to his multi-million dollar move from Spanish club Atletico Madrid.

Aguero wrote: "Now I am a City player. Happy to be at this club and in this city. Thank you to everyone for the welcome and the reception."

City had confirmed earlier in the day Aguero had arrived for talks and to undergo a medical with the fee reported by the UK Press Association to be $62 million.

If true it would make Aguero the club's most expensive signing.

Aguero recently played in the Copa America for Argentina and scored three goals as his side were knocked out in the quarterfinals by eventual winners Uruguay.

Now I am a City player. Happy to be at this club and in this city. Thank you to everyone for the welcome and the reception
--Sergio Aguero on Twitter
RELATED TOPICS

He started his career with Argentinian side Independiente before moving to Atletico in 2006. He has scored more than 90 goals for the club during his time there.

Aguero joins fellow Argentina striker Carlos Tevez at City, though he has stated his desire to leave the club in order to be closer to his young children, who live in his home country.

City will compete in the lucrative European Champions League this coming season after finishing third in the Premier League last season.

Meanwhile, AFP are reporting that former Estudiantes boss Alejandro Sabella is set to become the new coach of Argentina.

The Argentinian Football Association (AFA) sacked Sergio Batista after the team failed to get past the Copa America quarterfinals, a tournament they hosted.

Sabella quit as manager of Estudiantes in February despite leading the Argentinan club to the Copa Libertadores title in 2009.

Argentina remained 10th in FIFA's latest world rankings after their last eight exit in the Copa America, while winners Uruguay moved up to fifth -- their highest ever ranking.

Spain, Netherlands and Germany remain unchanged in the top three places respectively with Brazil moving up to fourth.