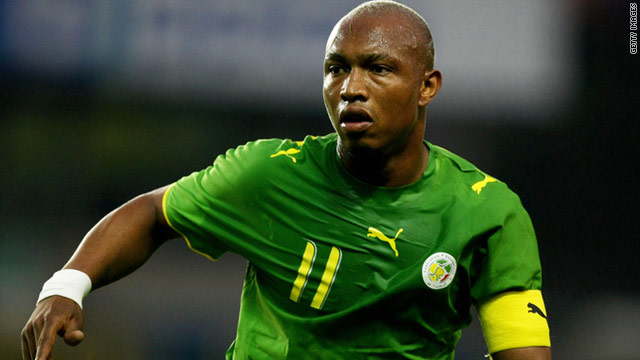 El-Hadji Diouf, who plays for Blackburn Rovers, has twice been named African footballer of the year.
STORY HIGHLIGHTS
RELATED TOPICS

(CNN) -- Two-time African footballer of the year El-Hadji Diouf has been banned from international football for five years by the Senegalese Football Federation (FSF).

The ban follows comments the striker, who plays for English club Blackburn Rovers, made in the media relating to corruption in African football.

In a statement posted on their official web site the FSF said Diouf would be forbidden "from performing any football-related activity for a period of five years with effect from the date of notification of this decision."

The FSF accused Diouf of "having greatly damaged the image of both Senegalese football and of its officers and administrative techniques."

In an interview with Radio France International Diouf said "the whole system of African football is corrupt" and spoke of "shenanigans" and "scams" within Senegalese soccer.

The FSF claim Diouf failed to appear at a disciplinary hearing earlier this month, though the player denied having been informed about it in a subsequent interview with French sports magazine Stade.

He also claimed he would "go to war" with the Senegalese football authorities if it followed through on its threat to ban him.

Controversy has followed Diouf throughout his career in the UK, where he has played for Liverpool, Celtic, Sunderland and Bolton.

Earlier this month his current manager at Blackburn, Steve Kean, said he thought it was time Diouf left the club after he failed to report on time for pre-season training.