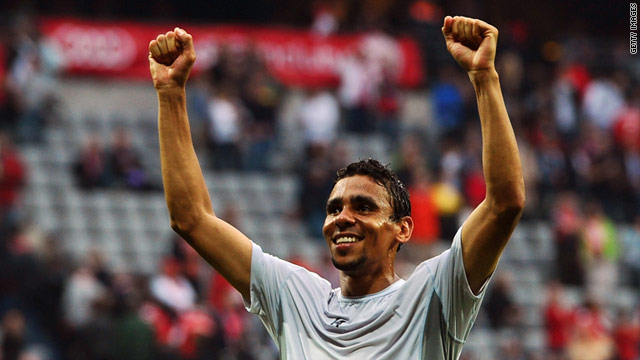 (CNN) -- German Bundesliga big-spenders Bayern Munich have suffered the worse possible start to the new season, going down to a shock 1-0 home defeat to Borussia Moechengladbach on Sunday.

Bayern spent over 40 million euros on new players during the close-season, but a mix-up between two of them handed the visitors all three points at the Allianz Arena.

Confusion between defender Jerome Boateng and goalkeeper Manuel Neuer allowed Gladbach striker Igor de Camargo to capitalize on a 62nd-minute long ball, firing home the only goal for a side that battled to avoid relegation last season.

Cacau on target as Stuttgart start with impressive victory

An out-of-sorts Bayern had earlier gone close when Mario Gomez's header struck the post, while Thomas Mueller was later to have a header ruled out for offside.

However, Gladbach fully deserved to collect their first victory in Munich for 16 years.

There was also a surprise result in Sunday's other Bundesliga match as last season's runners-up, Bayer Leverkusen, were beaten 2-0 at Mainz.

Mainz, who blazed a trial in the Bundesliga this time last year by winning their opening seven matches, got this campaign off to a perfect start when Sami Allaghui netted from a tight angle after a handling error from goalkeeper Fabian Giefer.

And Leverkusen, who blew a 3-0 lead before losing 4-3 to Dynamo Dresden in the German Cup last week, had their fate sealed when defender Omer Toprak netted a late own goal.

The results leave former champions Stuttgart and Wolfsburg top of the table after the first weekend of matches.

Stuttgart, the 2007 winners, beat Schalke 3-0 on Saturday, while 2009 champions Wolfsburg achieved the same scoreline at Cologne to share the early lead.

And defending champions Borussia Dortmund began the defense of their Bundesliga title on Friday evening with an impressive 3-1 success over Hamburg.

Elsewhere around Europe, Rennes claimed a thumping 5-1 away win at newcomers Dijon on Sunday to go top of the French table after the opening weekend's fixtures.

Dutch champions Ajax began the defence of their title in style on Sunday with a 4-1 victory at De Graafschap, a result that puts them top after the first weekend.

American international Jozy Altidore scored twice on his debut for AZ Alkmaar to help them defeat PSV Eindhoven 3-1 in the day's big match, while last season's runners-up FC Twente were held to a 0-0 draw at NAC Breda.

And in Scotland, Celtic maintained their 100% record from two matches with a 1-0 win at Aberdeen, but the result was tempered by star Honduran defender Emilio Izaguirre suffering a broken ankle after falling awkwardly.