United fight back to beat City in Community Shield classic 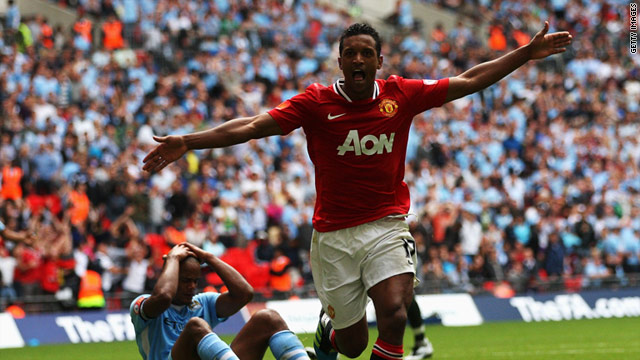 (CNN) -- Manchester United fought back from two-goals down to defeat rivals Manchester City 3-2 in a thrilling Community Shield at Wembley, the traditional opener to the English Premier League.

Champions United and FA Cup winners City are expected to be challenging for the title come next May -- and both teams showed exceptional quality in an end-to-end encounter that thrilled the 77,000 crowd.

City had beaten their neighbors 1-0 when they last faced each other at Wembley, in April's FA Cup semifinal, and Roberto Mancini's big-spenders looked to be heading towards a similar result with two goals in the space of seven first-half minutes.

The opener came in the 38th minute when David Silva curled in a delightful free-kick from the right and defender Joleon Lescott rose above the United defence to head past debutant goalkeeper David De Gea.

And, on the stroke of half-time, City extended their advantage when Bosnian striker Edin Dzeko picked up the ball just inside the United half and was allowed to run unchallenged before firing a low 25-year shot that swerved away from De Gea.

But United manager Alex Ferguson made five changes for the second half and the result was that his team dominated the second 45 minutes.

Then, with the match heading towards a penalty shoot-out, United snatched victory with virtually the final kick.

A City attack, which ended with Dzeko missing a close-range header, resulted in United clearing the ball out of defence.

But, with seemingly no danger, City defenders Gael Clichy and Vincent Kompany displayed indecision, allowing Nani to rob the ball from Kompany's feet.

The Portuguese winger then ran unchallenged towards City's goal, before rounding Hart and sliding the ball into an empty net to secure United a dramatic last- gasp victory.

The result will give United a major boost ahead of next weekend's opening round of fixtures -- will the last four Community Shield winners all going on to lift the Premier League title.