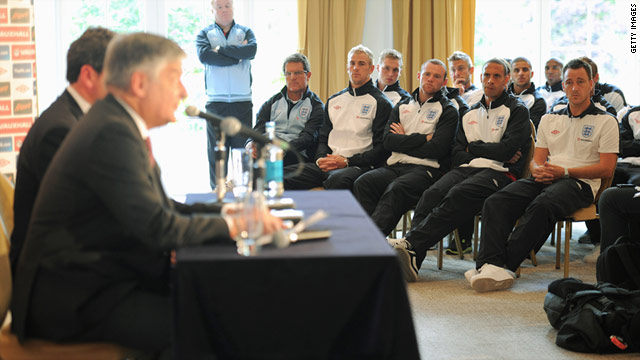 (CNN) -- England footballers including Wayne Rooney and Rio Ferdinand have appealed for calm in London after the country's international friendly with the Netherlands was postponed due to violence in the capital.

The English Football Association (FA) announced in a statement on Tuesday that Wednesday's planned match at Wembley in north London would not go ahead due to three days of rioting.

Shops have been looted and set on fire with police officers also coming under attack from gangs of youths as they desperately tried to deal with disorder in at least six different parts of the city.

Violence also spread to other cities, with youths smashing shop windows in Birmingham, not far from where England's cricket team are due to take on India in the third Test on Wednesday.

The FA said they had abandoned the game on advice from the Metropolitan Police, due to safety concerns. Ghana's friendly with Nigeria in Watford, just north of London, has also been called off.

"We're disappointed that tomorrow's game has been called off but obviously we understand the reasons behind the decision -- and support it," England's soccer stars said in a statement.

England vs Holland game is off, good call. Who wants to see a game of football when our country is in turmoil
--Rio Ferdinand on Twitter
RELATED TOPICS

"We've all seen the terrible pictures on the television and the most important thing at this time is the safety of the fans and the general public.

"At this time, the whole squad would like to appeal for calm and an end to the disorder."

The Premier League announced Tuesday they will be consulting with police as to whether three English top-flight games featuring QPR, Tottenham and Fulham would go ahead as planned during the opening day of the season on Saturday.

Three English League cup games due to be played in the capital on Tuesday were also postponed.

Several of England's players also voiced their concerns on Twitter, appealing for an end to the violence.

Manchester United striker Rooney said: "These riots are nuts why would people do this to there (sic) own country. Own city. This is embarrassing for our country. Stop please."

Rooney's teammate Rio Ferdinand added: "England vs Holland game is off, good call. Who wants to see a game of football when our country is in turmoil.

"I can't tell the youths exactly what to do but stealing tv's and trainers and burning peoples houses and shops aint (sic) solving nothing at all."

England's cricketers were advised to stay in their Birmingham hotel on Monday night as around 100 people were arrested during disturbances in the city center. They are due to play India on Wednesday.

Captain Andrew Strauss told reporters on Tuesday: "It's for the authorities to decide if it's unsafe to go ahead but we have no indication that's the case."

England's fast bowler James Anderson said on Twitter: "Awful scenes around the country. Saw it first hand in Birmingham last night. Great to see people coming together to help with the clean up."