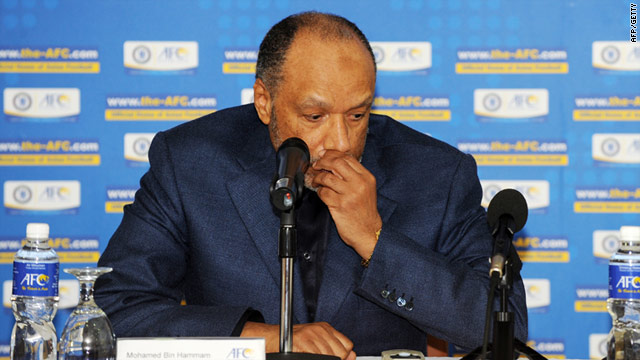 (CNN) -- FIFA are to investigate 16 Caribbean officials over a meeting that led to former presidential candidate Mohamed Bin Hammam being banned from soccer for life.

Football's world governing body announced in a statement on their web site they were to probe alleged violations of their code of ethics at a summit in Trinidad.

Bin Hammam was forbidden from having any involvement in the game after he was found guilty of offering cash for votes at the meeting, despite protesting his innocence.

His ban allowed Sepp Blatter to run unopposed for a fourth term in charge of the game.

Out of 25 Caribbean associations, Cuba were the only one that didn't attend the meeting in Port of Spain, where it is alleged Bin Hammam gave or offered cash gifts of around 40,000 US dollars.

Now officials from Barbados, the British Virgin Islands, the Cayman Islands, the Dominican Republic, Guyana, Haiti, St. Kitts and Nevis, St. Lucia, St. Vincent and the Grenadines, Trinidad and Tobago and the US Virgin Islands are to be investigated.

FIFA's statement read: "The FIFA Ethics Committee has opened ethics proceedings against 16 Caribbean Football Union (CFU) officials in regard to apparent violations of the Code of Ethics connected to the investigation of the cases related to the special meeting of the CFU held in Trinidad & Tobago on 10 and 11 May 2011.

"One of the officials, Colin Klass (Guyana), has been provisionally suspended from taking part in any football-related activity (administrative, sports or any other) by the chairman of the Ethics Committee, Claudio Sulser (Switzerland), after consideration of the specific information received on this matter.

"The Ethics Committee will contact the 16 officials to arrange further interviews in connection with these proceedings.

"It is important to note that the investigations are still ongoing, and that it is therefore possible that further proceedings could be opened in the future."