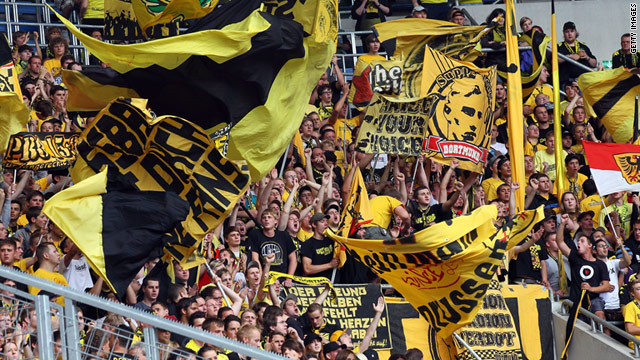 Borussia Dortmund fans who traveled to Hoffenheim were subjected to a high-pitched noise.
STORY HIGHLIGHTS

(CNN) -- An employee of German Bundesliga club Hoffenheim has admitted to using a device which emits a high-pitched sound to stop Borussia Dortmund fans singing offensive songs during their match at the Rhein-Neckar Arena on Saturday.

The purpose of the noise, according to the employee, was to stop Dortmund's traveling supporters from chanting insults at Hoffenheim's owner Dietmar Hopp.

The club, which gained promotion to Germany's top division in 2008, distanced themselves from the employee's actions and denied any knowledge that the device was being used.

"An employee of Hoffenheim admitted to using a corresponding [sound] device, on Saturday during the match against Borussia Dortmund," read a statement on Hoffenheim's official web site.

"According to this employee, he had longed for a 'remedy' to the insults directed at [club owner] Dietmar Hopp -- which, he felt, had become intolerable."

The statement went on to outline that the employee had meant the action to be "light-hearted" and the club apologized to fans of the German champions Dortmund who had been affected.

"The employee has also admitted that he was not aware of the impact his actions would have and intended them to be of a light-hearted nature.

"Hoffenheim has reacted with corresponding disciplinary action against the employee."

An investigation launched by Hoffenheim also discovered the device was set up on four occasions last season, in matches against Mainz, Cologne, Frankfurt and once again Dortmund, but not used.

The match finished 1-0 to Hoffenheim, with Sejad Salihovic's goal proving the difference between the two teams.

Hopp is one of the founders of German software corporation SAP AG and is the Hoffenheim's chief financial backer.

The 71-year-old has overseen Hoffenheim's promotion from the eighth tier of German football to the Bundesliga and also funded the construction of the club's 30,000-seater Rhein-Neckar Arena -- which opened in January 2009.