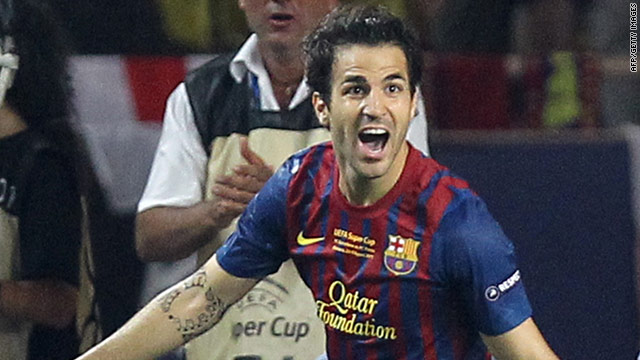 Spanish international midfielder Fabregas rejoined Barcelona from Arsenal for a fee in the region of $55 million earlier this month.

And although he was not named in the starting side by Barcelona coach Pep Guardiola, Fabregas showed his class after coming on as a substitute, bursting into the penalty area two minutes from the end to superbly chest down Lionel Messi's inch-perfect lobbed pass, before volleying home.

What now for Arsenal and Fabregas?

Messi, who on Thursday was handed UEFA's inaugural Best Player in Europe Award, celebrated that honor by opening the scoring in the 39th minute.

A defensive mix-up left Messi through on goal, and the Argentine maestro dummied Porto goalkeeper Helton before expertly sliding the ball home.

The Portuguese side, who won their domestic league without losing a game last season, had two free-kick opportunities in the opening 45 minutes, but Brazilian striker Hulk missed on both occasions.

There was nothing to choose between the sides after the break, but Barca showed their squad depth by bringing on new signings Fabregas and Chilean winger Alexis Sanchex, and they started to take control of the match.

With four minutes to go, Porto had Rolando sent off for hacking down Messi, and the 10 men then fell behind to Fabregas' effort.

And Porto's misery was complete in the final minute when Fredy Gurain was also shown a straight red card for a late challenge on Javier Mascherano.

The result gave Barcelona the trophy for the fourth time in their history and second in three years.