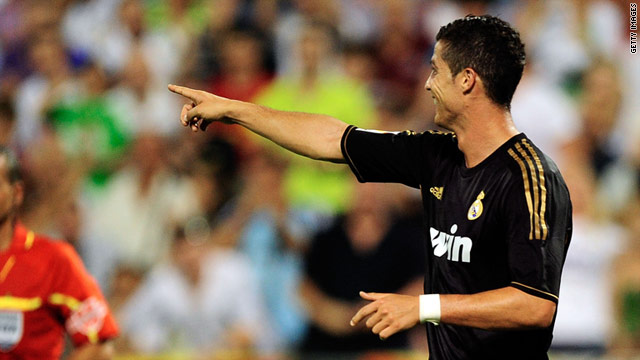 Cristiano Ronaldo has already found his scoring form with a hat-trick in Real Madrid's 6-0 thrashing of Zaragoza.
STORY HIGHLIGHTS

(CNN) -- Real Madrid began their Spanish Primera Liga campaign in style on Sunday, as Cristiano Ronaldo scored a hat-trick in a 6-0 demolition of Real Zaragoza.

Ronaldo opened the scoring early on after converting Mesut Ozil's pass and defender Marcelo added a second to give the visitors a comfortable advantage at the break.

The second half was all one-way traffic as Ronaldo helped himself to two more from close range, while Xabi Alonso and Kaka chipped in with superb long- range strikes, as Jose Mourinho's men sounded an early warning to champions Barcelona, who begin the defense of their title at Villarreal on Monday evening.

"At 2-0 the game was already over and so it depended on whether we played together or individually and the players chose the first option so we won by a big margin," Mourinho told reporters.

Ronaldo finished joint top scorer in Spain with Lionel Messi last season, and the two star strikers are expected to battle it out at the top of the goalscoring charts again this campaign.

Negredo opened the scoring with a superb header in just the second minute and he doubled the home side's advantage midway through the first half, before Santi Cazorla scored a late consolation goal for Malaga.

In Sunday's other Spanish matches, a deflected Jonathan De Guzman strike gave Real Mallorca a 1-0 win over Espanyol, while the other three matches all ended in draws; Atletico Madrid 0-0 Osasuna, Athletic Bilbao 1-1 Vallecano and Getafe 1-1 Levante.

There were two matches in Germany on Sunday, with Spanish legend Raul scoring the only goal as Schalke beat Moenchengladbach 1-0.

Moenchengladbach had gone into the weekend's fixtures top of the table, but their first defeat of the season sees them drop to fifth, while Schalke are up to second place, behind leaders Bayern Munich on goal difference.

The other match saw Hannover and Mainz share a 1-1 draw, a result that sees Hannover end the weekend in fourth place as the only unbeaten side left in the Bundesliga.