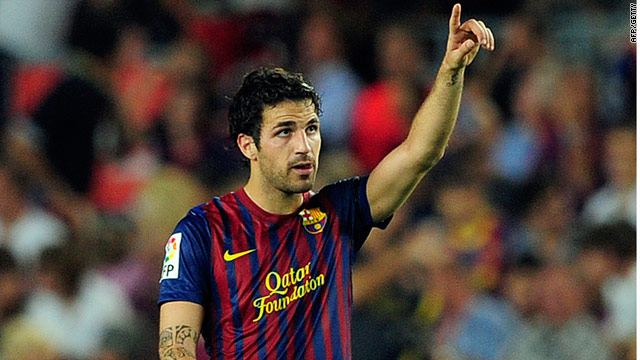 (CNN) -- Barcelona began the defense of their La Liga crown with a convincing 5-0 win over Villarreal in the Nou Camp Monday night.

Lionel Messi then added a double for Pep Guardiola's all-conquering team who have already added to their trophy cabinet with victories in the Spanish Super Cup and European Super Cup before the start of their league campaign.

Arch-rivals Real Madrid opened their title bid with a 6-0 rout of Real Zaragoza Sunday and Barca were just as impressive once youth team graduate and Spanish under-21 international Thiago had set them on the way with a 25th minute opener.

Home goalkeeper Victor Valdes made a brilliant save to deny Giuseppe Rossi in a rare Villarreal attack before the champions stretched their lead.

Fabregas, who combined superbly with Messi in midfield, used that understanding to latch on to a neat through ball from the Argentine ace and add the second just before halftime.

Any hopes of a Villarreal comeback were snuffed out quickly after the break as Chile winger Sanchez used his pace to burst clear of the visiting defense and notch the third.

Messi weaved his way to add the fourth and fifth to add the icing on the cake for the three-time defending Spanish champions.