Messi takes over as Argentina captain for friendly 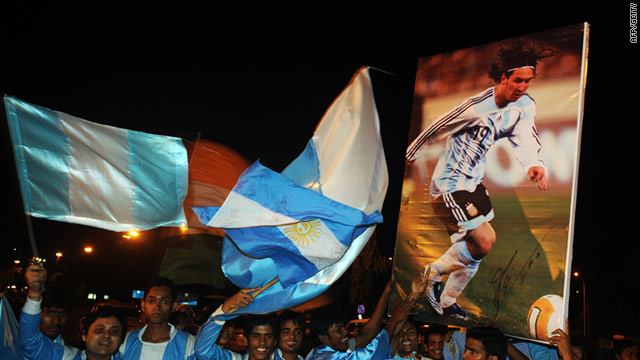 Indian fans hold a Messi flag as they await his arrival at Kolkata airport.
STORY HIGHLIGHTS

(CNN) -- Lionel Messi will captain Argentina for the first time as they take on Venezuela in a friendly in cricket-mad India Friday.

Messi has been handed the responsibility by new Argentina coach Alejandro Sabella after their disappointing Copa America campaign.

They went out in the quarterfinals to eventual winners Uruguay, costing then coach Sergio Batista his job.

"He is the captain from now on," Sabella told gathered reporters Wednesday ahead of the match in the 120,000 capacity Salt Lake stadium in Kolkata.

"We are looking to build a couple of options, looking for one or two players to build up a combination with him."

The arrival of World Footballer of the Year Messi in India has been greeted with much excitement and a big crowd gathered at Kolkata airport as he flew in.

Barcelona star Messi and his teammates will be looking for a morale-boosting win over their South American rivals in the biggest football match over played in India.

They will then go to Bangladesh for a friendly against Nigeria's Super Eagles on September 6 as they prepare for 2014 World Cup qualifiers which begin in October.

"Winning will give us confidence. This is the beginning of a long trip ahead and we hope it finishes with qualification to the World Cup," added Sabella.

Friday's match will be played on an artificial pitch in a cricket stadium adapted for football.