You're Fore it! How bad golf shots can lead to a lawsuit

By Will Tidey for CNN 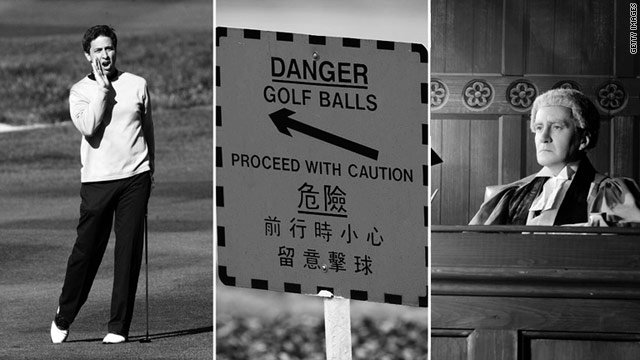 Golf-related incidents have seen lawsuits of up to a $1 million in recent times.
STORY HIGHLIGHTS

(CNN) -- Bunkers, thick rough and water are familiar hazards that face golfers all over the world, but how many amateur players are prepared for a possible lawsuit?

But with recent settlements ranging from $120,000 to $1 million, club golfers would perhaps be wise to pack an insurance policy along with their waterproofs.

"If you take a risk while playing golf you're laying yourself open to hundreds of thousands of pounds worth of damages," Richard Cramer of Leeds-based law firm FrontRow Legal told CNN.

"I would urge all regular amateur players to buy insurance because it's now easier than ever to bring a big class action if you suffer an injury on the course. Anytime you're deemed to be negligent or reckless on the golf course you lay yourself open to an action."

If you take a risk while playing golf you're laying yourself open to hundreds of thousands of pounds worth of damages
--Richard Cramer, Frontrow Legal
RELATED TOPICS

Cramer's comments come after a doctor sued his opponent who blinded him with a stray golf shot on a nine-hole golf course in Long Island, New York.

Dr. Azad Anand was hit by his playing partner's, Dr. Anoop Kapoor, stray shot. Anand argued that Kapoor had given no warning he was about to play from the rough and was therefore liable.

Anand's injuries seriously affected his work as a neuroradiologist, but the New York states Court of Appeals found against his lawsuit, ruling: "Kapoor's failure to warn his intent to strike the ball did not amount to intentional or reckless conduct."

However, in England a similar case ended with a $120,000 settlement, after a man hit a female golfer, who was standing ahead of him on the ladies' tee, with his drive.

Bristol-based firm Golfplan Insurance, who paid out on the claim, said it remains "the UK's largest public liability claim for a golf sports injury."

This time the man had given the time-honored warning of "Fore!", but the court ruled it did not absolve him from blame.

A similar ruling in a 2002 case relating to an incident on a golf course in Nova Scotia, Canada, ended with the award of $227,500 in damages.

Four friends were enjoying a round of golf in the build-up to a wedding when one of their number, Travis Hayter, took a run up and attempted to hit a drive in the style made famous by Adam Sandler's character in the movie "Happy Gilmore".

His shot hit Alan Bezanson, the groom's cousin, in the wrist and caused him a loss of earnings in his job as a logger. Justice Arthur J. LeBlan, a Nova Scotia Superior Court judge, awarded Bezanson damages in 2009.

Golf clubs themselves are not immune to personal injury lawsuits on the course either, as a 1985 case in Japan proves.

"International Sports Law and Business, Volume 1" highlighted a case in Tokyo which saw a golfer hit by a wayward tee shot while standing on an adjacent tee. He brought actions against the golfer responsible and the golf club -- who it was alleged had been negligent in their design of the course.

The Tokyo District Court dismissed the claim against the golfer, but found the golf course owner negligent for not erecting a fence between the two tee boxes. The ruling adjudged the course owner should have appreciated a foreseeable risk in the positioning of the tee boxes and acted accordingly.

But by far the biggest settlement related to an incident at a Florida golf course in 2000, where a man was blinded and awarded $1 million in damages.

Gaylon Jones was on the driving range at the Westchase Golf and Country Club when he "'toed" a drive and struck a granite marker used to separate players from each other. His ball rebounded and struck him in the face, causing permanent damage and ultimately the loss of his right eye.

Jones sued the golf course and management company, leaning on the testimony of a starter -- who said he'd warned the assistant professional about the dangers of the granite markers. He won a settlement in November 2007.

If you get sued and you don't have insurance, your possessions and even your personal property could be in danger
--Richard Cramer of Leeds-based law firm Frontrow Legal

"It was a just outcome. The precedent is the duty of the establishment to act with reasonable care," said Lee D. Gunn IV, who represented Jones on behalf of the Gunn Law Group.

"They had the granite markers there for cosmetic reasons and ultimately something like this was always going to happen."

But when Paul Sanchez III filed a similar lawsuit in New Hampshire, after his ball bounced back off a yardage marker and left him blinded in one eye in 2006, the New Hampshire Supreme Court ruled obstacles were an inherent risk in the game.

It seems clear with a potential $1 million lawsuit lurking on every tee box, fairway, green and beyond, golfers would be wise to follow Cramer's advice and think of possible consequences.

"If you get sued and you don't have insurance, your possessions and even your personal property could be in danger," said Cramer.

The message is simple. Act now or you could be Fore! it.