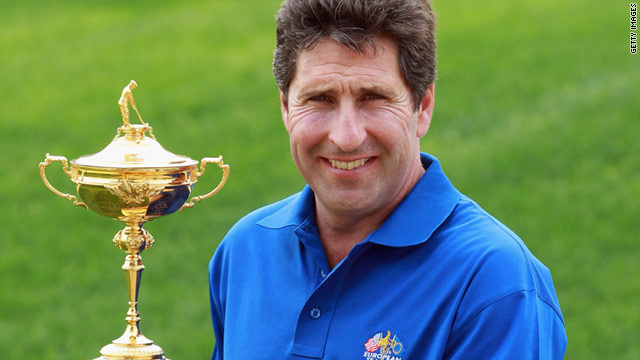 (CNN) -- Jose Maria Olazabal is looking forward to the biggest challenge of his career after being named as Europe's new team captain for the 2012 Ryder Cup.

The 44-year-old Spaniard takes over from Colin Montgomerie, having been one of the Scot's vice-captains as Europe regained golf's most prestigious prize from the the United States in October.

He has a rich playing record in the biennial event, having been a winner on three occasions in seven appearances since his debut in 1987.

"The Ryder Cup is welded in my heart. I do have wonderful memories. It has meant so much to me," Olazabal told reporters at his unveiling in Abu Dhabi on Tuesday.

The last couple of months, I felt a noticeable improvement in my health condition. I'm feeling much better
--Jose Maria Olazabal
RELATED TOPICS

Olazabal is a two-time major winner having triumphed at the U.S. Masters in 1994 and 1999, and he is eighth on the European Tour's all-time list with 23 victories, but he has battled ill health in recent years.

His last Ryder Cup appearance was a winning one in Ireland in 2006, though he played only three events last year as he continued his fight against rheumatism -- a factor that had forced him to play down reports that he would become Europe's captain.

"That was the main concern. Regarding that, the last couple of months, since I played Valderrama last year, I felt a noticeable improvement in my health condition," Olazabal said.

"There should be no problem. I'm feeling much better and that's the reason why I said yes."

While Montgomerie said following the epic final-match victory at Celtic Manor in Wales that he expected changes to the team selection policy, Olazabal does not intend to make any drastic moves ahead of the qualification period starting in September.

The U.S. team allows for four captain's picks to be made outside the eight places on offer through rankings points, but Olazabal said he was considering asking to reduce his wildcard selection from three to two for the trip to Illinois.

"The more picks you get, well, the less value I think you give to the players that finish from eight to 10, and I think to finish in the top 10 you have to play great golf, and it was proven the last time," he said.

"And to make the top 10, five through the world rankings and four through the European Tour rankings, you need to have an extremely great year. And it would be a shame to tell any of those guys, you're not in."

"Speaking to players on tour and speaking to committee members, it was probably the easiest decision I've ever have to make for Ryder Cup captain," the Dane told reporters.

"We normally do it at a committee meeting. But there was a general feeling from the whole membership that Jose needed to be the next captain. We didn't feel that we needed to sit in a committee meeting and discuss this, because it was the one man that everybody on this tour wanted to be captain."