Brier makes most of sponsor's invitation to lead Qatar Masters 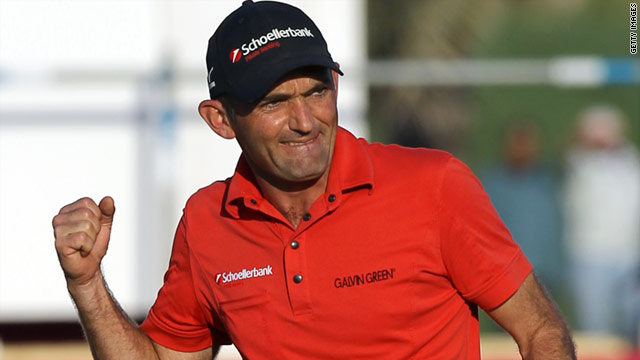 Austrian Markus Brier leads the Qatar Masters after a round of 66.
STORY HIGHLIGHTS

(CNN) -- He's only playing at the Qatar Masters due to an invitation from a sponsor but Austrian Markus Brier took full advantage by shooting a second round-66 to lead the field by a shot.

The world number 478 had to return to qualifying school to retain his place on the European Tour back in November and six birdies catapulted him to the top of the leaderboard on six-under-par.

Following his opening round-71, Brier made full use of a morning lull in the fierce winds that disrupted the first day's play to hold a one shot advantage over South African Darren Fichardt.

World number one Lee Westwood missed the cut after finishing on four-over, meaning Germany's Martin Kaymer can usurp him at the top of the rankings by finishing first or second. But he is currently ten shots off the pace.

I knew I had to start all over again, and fortunately I made it at qualifying school
--Markus Brier
RELATED TOPICS

"I could see in the morning it was a little less wind, and so obviously the opportunities were there," Brier told the European Tour website.

"I kept the ball in play and holed a few two or three really long putts, and that obviously makes the difference between a good and very good round. I didn't make mistakes.

"I was lucky on nine -- my last hole -- with a wayward drive and made birdie out of it, so that's like a two shot win there. The rest was pretty solid. It's great to be up there again and hopefully it stays like this."

It caps a remarkable turnaround in Brier's fortunes after he finished 137th in last year's Race to Dubai.

"The first week was pretty good in East London. I was up there again and that helped build up confidence. I just feel more comfortable, and I got my head really on the golf and not so much on other things or bad things like last year."

Day one leader Retief Goosen carded a double bogey on the 17th to slip back to four-under but Bjorn shot the best round of the day with a round-65.

Bjorn said: "It was one of those days where everything just went my way, and I putted well. I had some great chances coming down the stretch to go even lower, but golf just seemed simple today."