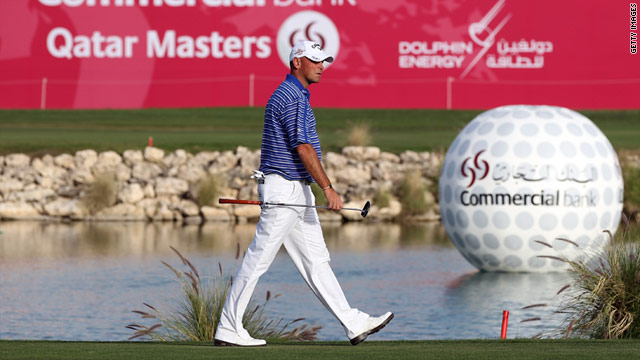 (CNN) -- Danish golfer Thomas Bjorn made himself the player to beat at the Qatar Masters with a late surge on Saturday, claiming a one-shot lead going into the final round of the European Tour tournament.

The 39-year-old birdied four of the last five holes on Saturday to card a six-under-par 66 which moved him up to 11-under 205, leapfrogging overnight leader Markus Brier of Austria.

European Ryder Cup vice-captain Bjorn, last a winner at the 2010 Estoril Open in Portugal, is aiming for his 11th tour title having followed up Friday's round of 65 with another strong showing.

"When you finish a round with four birdies in the last five, you have to walk off very happy," Bjorn told the European Tour website.

I played fantastic yesterday and felt comfortable this morning, and felt good with the way my golf is
--Thomas Bjorn
RELATED TOPICS

"I played fantastic yesterday to shoot that 65 and felt comfortable this morning, and felt good with the way my golf is.

"I'm feeling quite comfortable on the golf course considering it's been a while since I've been in that kind of situation, so I'm pleased with the way the day panned out."

Brier, ranked 478th in the world, could not improve on Friday's second-round 66 as he finished on 69 after his second bogey of the round at the final hole -- but is still in second place with 18 to play on Sunday.

The 42-year-old, who was without a single top-20 finish on the European Tour last year and is playing only by virtue of a sponsor's invitation, is confident he can reignite his career with success in the Middle East.

"Obviously when you bogey the last, it's never nice. But I just had a really bad shot -- it happens, and the rest was good," said Brier, who birdied the fourth and sixth before his first slip at the ninth.

"I made a few crunch putts at the end. I got a bit lazy with my shots but I managed to keep my score good, and just one shot back is nothing."

Defending champion Robert Karlsson is also still in touch with the leaders as he seeks to become the first player to win back-to-back titles in the event.

The Swede was just three strokes behind Bjorn in third spot after carding five birdies in his last seven holes for a 69 which put him on 208.

Thomas Aiken of South Africa also shot 69 to finish the day in fourth place on seven under, while Spain's Alvaro Quiros (66) and England's Richard Finch (71) tied for fifth on six under.

But a disappointing round of 75 left South Africa's first-round leader and 2007 champion Retief Goosen tied for 28th place on 215 alongside world No. 2 Martin Kaymer and Spain's Sergio Garcia (69).

Kaymer could replace Lee Westwood at the top of the rankings with a first or second-place finish after the Englishman missed the weekend cut, but was 10 shots off the pace despite his best round of the week.

The German made up for a ninth-hole bogey with five subsequent birdies -- including one at the last -- but his opening 77 and Friday's 70 mean he has a mountain to climb.

Meanwhile, Tommy Gainey continued to defy expectations by leading at the halfway stage of the PGA Tour's weather-affected Phoenix Open in Arizona.

The 35-year-old, who played on the second-tier Nationwide Tour last year before earning his card, followed up his opening eight-under 63 with a 65 to be one shot clear of fellow American Mark Wilson when the second round was finally completed on Saturday.

Three-time Masters champion Phil Mickelson also shot 65 to be tied for fifth with 2010 rookie of the year Rickie Fowler, who fired a tournament-best 62 to also be on 132 -- four shots off the lead.

The Scottsdale tournament is expected to finish on Monday after seven hours' play has been lost so far due to freezing morning conditions.