Woods flops as Quiros aces his way to Dubai victory 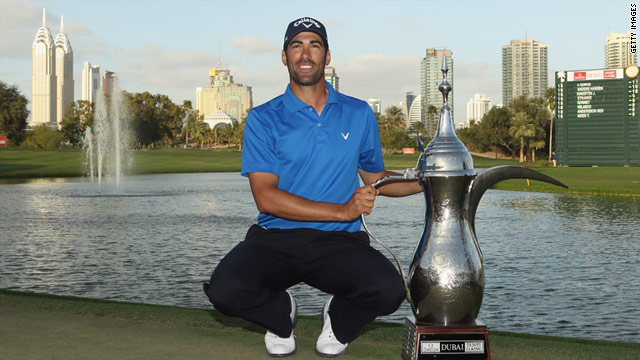 Alvaro Quiros played superbly on the final day to land the trophy at the Dubai Desert Classic.
STORY HIGHLIGHTS

(CNN) -- Spain's Alvaro Quiros carded a hole-in-one on the way to a remarkable victory in the Dubai Desert Classic as Tiger Woods and a host of big-name contenders fell away in Sunday's final round.

The 28-year-old from Cadiz clinched the most notable victory of his career with a four-under 68 which included a eagle-two at the second, a triple bogey seven on the eighth and tellingly an ace on the 11th.

But Woods, who started the day in a seven-way tie for fourth, one shot behind leaders Rory McIlroy and Thomas Aiken, slumped to a three-over 75.

The former world number one is still without a win in 15 months and bogeys at the second and third left him with an uphill task.

"Very frustrating," was Woods' analysis of his round.

"I got off to such a poor start -- I was two-over through three early and just couldn't make it up from there.

"But there were quite a few positives this week. Also a couple of glaring examples of what I need to work on, which is good. I'll go to work next week," he told the official European Tour website.

McIlroy, the 2009 winner in Dubai, also dropped shots early in his round and could never get on terms with the pace being set by Quiros and finished with a 74 for a tie for 10th on six-under.

World number one Lee Westwood mounted a last-day charge, but not for the first time this week he finished poorly -- carding a double bogey 6 on the 17th and a bogey 6 on the last for a 68 and a tie for 15th.

Quiros, who finished second behind Thomas Bjorn in Qatar last week, will move up to 21 in the rankings on Monday and is leading the Race to Dubai after the lucrative four-tournament "Desert Swing" in the Gulf region.

"The start was perfect with the eagle on two, but I was shaken after the eighth," he told the European Tour website.

"I was lucky with some putts around the turn and then a three-quarters wedge on the 11th -- it was a perfect shot - once a year it happens."

Fourth place at nine-under was shared by France's Jean-Baptiste Gonnet (70), Scott Strange (68) of Australia and Alvaro Velasco of Spain (70).