Tiger Woods tweets apology after being fined for spitting in Dubai 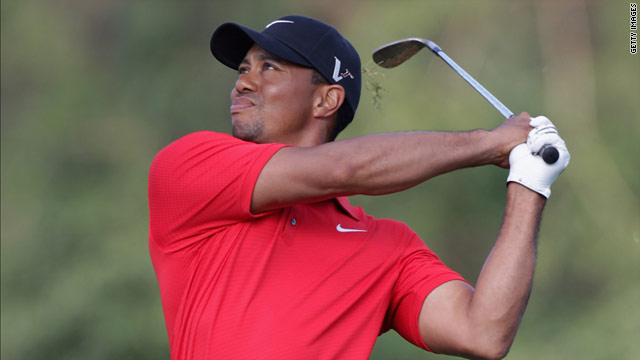 Tiger Woods had a disappointing final round at the Dubai Desert Classic.
STORY HIGHLIGHTS

(CNN) -- Tiger Woods has apologized after he was fined by the European Tour for spitting on the 12th green during the final round of the Dubai Desert Classic.

The world number three endured a torrid Sunday and was caught on camera spitting near the hole after missing a par putt when playing with Sergio Garcia, from Spain.

Woods has been fined an undisclosed amount after European Tour officials reviewed footage of the incident.

The former world number one took to Twitter on Monday to express his remorse: "The Euro Tour is right -- it was inconsiderate to spit like that and I know better. Just wasn't thinking and want to say I'm sorry."

Woods flops as Quiros aces his way to Dubai victory

He added: "Everyone was terrific all week, fans especially. Dubai is always a fantastic host. Just wish the week could have ended better."

A spokesman for the European Tour told CNN: "The tournament director, Mike Stewart, feels there has been a Breach of the Tour Code of Conduct and consequently Tiger Woods will be fined."

It was inconsiderate to spit like that and I know better. Just wasn't thinking and want to say I'm sorry
--Tiger Woods
RELATED TOPICS

Woods went into the final round on Sunday just one shot off the lead but struck a three-over-par 75 to sink down the leaderboard.

It was his worst round as a professional on a regular European Tour event and he finished in 20th place.

He was visibly irritated as it became clear his 14-month title drought was set to continue and afterwards described his play as "very frustrating" on the European Tour's official website.

"I got off to such a poor start -- I was two-over through three early and just couldn't make it up from there.

"But there were quite a few positives this week. Also a couple of glaring examples of what I need to work on, which is good. I'll go to work next week."

The tournament was eventually won by Spain's Alvaro Quiros, who carded a hole-in-one during his round of 68 to finish on 11-under.

Woods' next appearance will be at the Accenture World Match Play Championship in Tuscon, Arizona.

Points finished with a five-under-par round of 67 to finish on 15-under for the tournament -- two clear of Hunter Mahan.