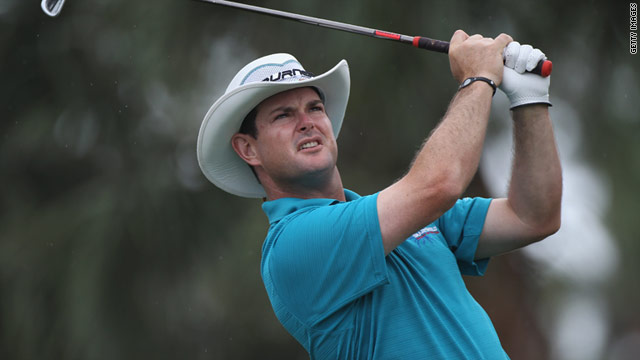 Rory Sabbatini held on to claim victory in the Honda Classic despite a late charge from Korean YE Yang.
STORY HIGHLIGHTS
RELATED TOPICS

(CNN) -- South African Rory Sabbatini has claimed his sixth PGA Tour title after holding off a late charge from Korean YE Yang to secure a one-stroke victory in Florida's Honda Classic on Sunday.

Sabbatini went into the final round with a clear five-shot advantage over 2009 Honda winner Yang and American Jerry Kelly.

But while 34-year-old Sabbatini carded a steady level-par 70, Yang fired a superb four-under-par 66, while Kelly also went close, finishing a further stroke behind in third place after posting a 67.

Sabbatini had not won an event since the 2009 Byron Nelson Championship, but he held his nerve to finish on a 72-hole total of 271 (-9), winning a cool $1 million first prize in the process.

"Luckily I had enough of a cushion that I didn't get too concerned," Sabbatini told the official PGA Tour website.

"I knew going into today that if I shot even par, it was going to be tough to catch," he added.

Ricky Barnes finished alone in fourth place, five strokes off the pace, while England's Lee Westwood failed in his bid to regain the world No.1 ranking.

A top three position would have seen Westwood overtake Germany's Martin Kaymer at the top of the rankings, but he finished joint 29th on 284 -- 13 shots behind Sabbatini.