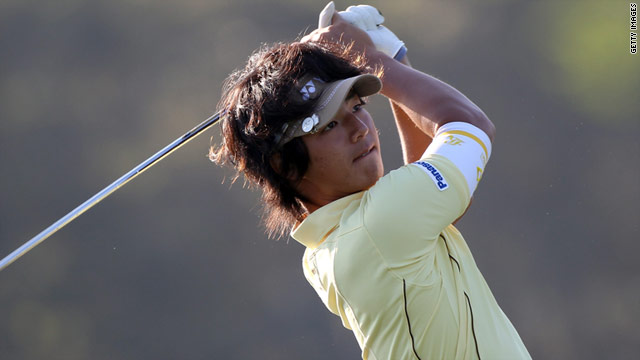 Japanese golfer Ryo Ishikawa carded a world record round of 58 in May 2010.
STORY HIGHLIGHTS
RELATED TOPICS

(CNN) -- Japanese golf prodigy Ryo Ishikawa has announced he will donate his tournament earnings from 2011 to the victims of the tsunami which recently devastated the Asian country.

Ishikawa, 19, will also give $1,200 for every birdie he achieves during the year and the world number 45 is planning a tour of the severely effected Tohuku area of Honshu Island.

"I feel thrilled. My goal is 200 million yen [$2.4 million]," Ishikawa is reported as saying by news agency AFP.

The Saitama-born star turned professional in 2008 and has earned in excess of $1.2 million during each of his three years in the sport, according to AFP.

Ishikawa broke a world record in May 2010 when he shot the lowest-ever score in a major golf tournament with a 12-under par 58.

"I have enough money to spend for my golf. I still have savings. I believe this is the most positive way for me to spend money," he added.

The nine-time winner in Japan finished third on the country's money list in 2010 and sought the advice of his father, who is a banker, before making the decision.

Ishikawa is currently in the U.S. preparing for The Masters at Augusta in Georgia, which is due to start on April 7.

The earthquake and tsunami which ravaged Japan is estimated to have claimed 18,000 lives and prompted a nuclear crisis at the stricken Fukushima plant.