McIlroy - I will get over Masters heartache 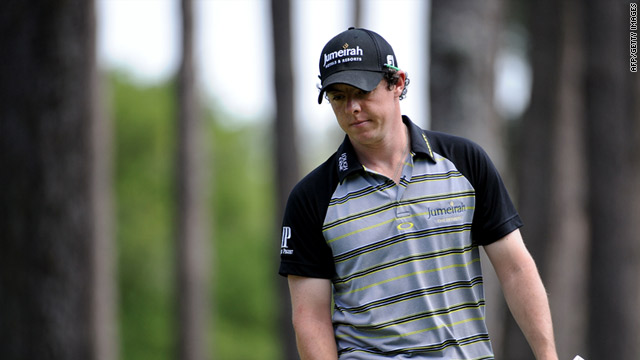 Rory McIlory threw away a four-stroke Masters lead after capitulating to a final round 80 at Augusta.
STORY HIGHLIGHTS

(CNN) -- Rory McIlroy has been reflecting on his meltdown at the Masters, after the 21-year-old squandered a four-stroke lead going into the final round at Augusta, eventually carding an eight-over-par 80 to finish 10 strokes behind winner Charl Schwartzel.

"I was leading this golf tournament with nine holes to go, and I just unraveled. Hit a bad tee shot on 10, and then never really recovered. It's going to be hard to take for a few days, but I'll get over it."

McIlroy is not alone in crumbling on the back nine whilst leading the Masters and joins a famous list that includes great names such as Ben Hogan, Arnold Palmer, Scott Hoch and Greg Norman.

It's going to be hard to take for a few days, but I'll get over it
--Rory McIlroy
RELATED TOPICS

And McIlory admitted that when he missed the fairway on the 13th hole, he knew his Masters dream had died.

"I'd knew that unless I birdied my way in, I realized I didn't have a chance," McIlroy said. "I realized that was it then.

"But this is my first experience at it and hopefully the next time I'm in this position I'll be able to handle it better.

"I didn't handle it particularly well obviously, but it was a character-building day, put it that way. I'll come out stronger for it."

And, speaking on his Twitter feed, McIlroy quoted Muhammad Ali, saying: "It's repetition of affirmations that leads to belief -- and once that belief becomes a deep conviction, things begin to happen."

McIlory also received some words of encouragement from Schwartzel who said: "Golf is a really funny game -- one moment you're on top of it, the next moment it bites you.

"Rory is going to feel hurt. It's not easy what he went through. He is such a phenomenal player and he will win one.

"The first just happens to be the toughest, and that may be the biggest lesson of all," added the South African.

Shane O'Donoghue sits down with the 2011 Masters champion, Charl Schwartzel.
The elite of Masters Champions

The arrival of another Tiger Woods computer game was nothing short of a revolution in the cloistered world of Augusta National.
Caddy Carl: A true master of Augusta?