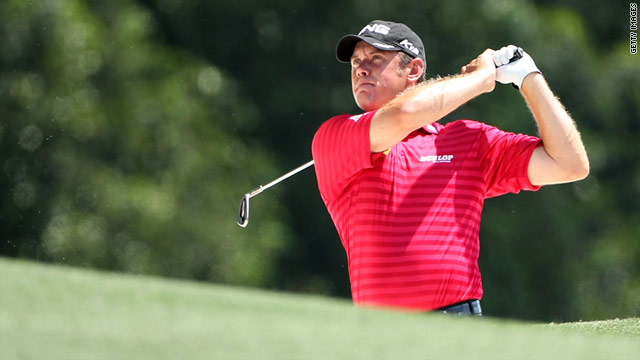 Lee Westwood is back at the top of golf's world rankings after his victory at the Indonesia Masters on Sunday.
STORY HIGHLIGHTS
RELATED TOPICS

(CNN) -- Lee Westwood has regained the top spot in golf's world rankings after clinching victory by three strokes at the Indonesia Masters on Sunday.

His compatriot Luke Donald failed by the narrowest of margins to claim the No.1 spot for himself after losing the PGA Tour Heritage tournament in a sudden-death playoff to American Brandt Snedeker.

Victory at the PGA Tour event -- which had more ranking points on offer than the tournament in Indonesia -- would have seen Donald leapfrog Westwood and Germany's Martin Kaymer, who has been the world's highest ranked player since February.

Donald took a one-stroke lead into Sunday's final round at the Harbour Town Golf Links in South Carolina and posted a one-under par 70 to finish on 12-under par.

But Snedeker shot the round of the day -- posting a seven-under par 64 -- to tie the lead with Donald, who almost holed his bunker shot at the 72nd hole to win the tournament.

The 30-year-old from Nashville eventually came out on top after Donald posted a bogey five at the third extra hole, ending his hopes of becoming only the third Englishman (after Westwood and Nick Faldo) to reach the summit of the world rankings.

Earlier in the day, Westwood had started his final round at Royale Jakarka Golf Club sitting on a overnight five-shot lead.

But that soon narrowed to just one stroke as the chasing pack gained ground while Westwood stuttered after a bright start.

A birdie at the first hole was cancelled out immediately by a bogey at the second which was then followed by a string of eight pars.

But Westwood regained his putting touch on the back nine with back-to-back birdies at the 11th and 12th holes.

Another came at the par four 16th hole allowing Westwood to canter home three clear of Thailand's Thongchai Jaidee and clinch the 34th title of his career.

The big-hitting Belgian sealed a comfortable win -- his first since turning pro a decade ago -- with a faultless final round six-under par 66.

Colsaerts finished the tournament on an impressive 24-under par ahead of Spain's Pablo Martin, Kiwi Danny Lee, Ireland's Peter Lawrie and Denmark's Soren Kjeldsen, who all shared second place.

The 28-year-old's triumph is only the second time a Belgian player has won on the European Tour, according to EuropeanTour.com.

The other was Philippe Toussaint who claimed the Benson and Hedges Festival of Golf at the UK's Fulford Golf Club way back in 1974.