Westwood on top of the world after reclaiming golf's No.1 status 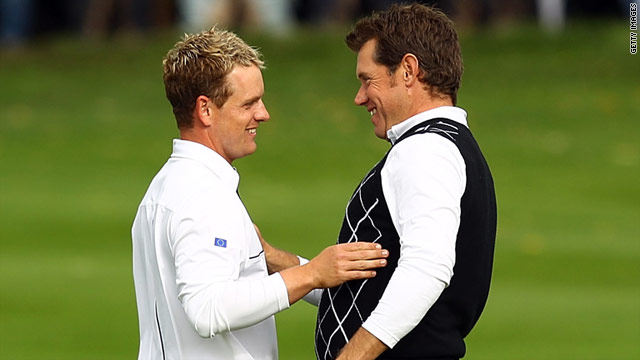 Lee Westwood (R) leapt to the top of the golf world rankings on Sunday, at the expense of Ryder Cup teammate Luke Donald.
STORY HIGHLIGHTS

(CNN) -- Lee Westwood says he is "delighted" and "proud" after recapturing golf's world number one status with victory at the Indonesia Masters.

Westwood seized back top spot on Sunday after fellow Englishman Luke Donald lost in a playoff to Brandt Snedeker at the PGA Tour Heritage tournament in South Carolina.

It is the second time in quick succession that Westwood has been crowned No.1 after he ended Tiger Woods' record-breaking 281-week reign in October last year.

But there was no rest for Westwood, who had double cause for celebration on Sunday after turning 38, as he headed straight for the Ballantine's Championship in Korea.

"I'm delighted to be coming to the Ballantine's Championship as World Number One," he told the European Tour web site.

"Being top of the Official World Golf Ranking makes me feel very proud and I'm sure Korea's knowledgeable and passionate golf fans are aware of the hard work and dedication it takes to reach that position.

"I'm very much looking forward to the tournament and hopefully I'll give the galleries plenty to cheer about in the coming days."

Donald, who was a Ryder Cup teammate of Westwood's as Europe reclaimed the famous trophy from the United States in Wales last year, congratulated his friend on Twitter as he headed to Louisiana for the Zurich Classic of New Orleans.

He said: "I battled all the way today, hats off to Sneds (Snedeker) for an unbelievable 64. Congrats too to Lee Westwood for his win and No.1 ranking. Will be gunning after you next week in New Orleans!"

Martin Kaymer, the man Westwood replaced at the summit, is also playing in Korea, as is American Dustin Johnson, ranked 12 in the world, and South African legend Ernie Els.

Westwood says he is excited to play in Seoul for the first time in his long career and defend his new status.

He added: "Korea has really put itself on the world golf map these past few years with the performances of its top players and the facilities there are second to none, so it has all the makings of a great week.

"I've never been to Seoul before and it's always nice to experience new places and cultures -- and the courses in Asia are normally good, so I'm really looking forward to it."