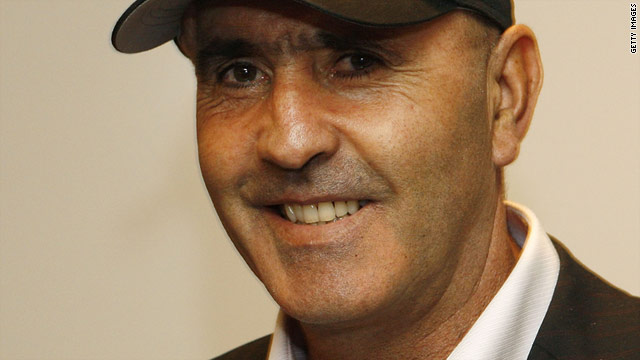 (CNN) -- The health of legendary golfer Seve Ballesteros has taken a turn for the worse, his family revealed on Friday.

The 54-year-old had a brain tumor removed in late 2008, more than a year after he ended his illustrious career in the sport.

"The Ballesteros family informs that Seve's neurological condition has suffered a severe deterioration," read a statement on the Spaniard's website.

"The family will inform accordingly about any change in his health condition and takes this opportunity of thanking everyone for the support that both Seve and his own family have been receiving during all this time."

CNN contacted Ballesteros' office in Santander to ask if he had returned to hospital, but was told that no further information would be given outside his personal website.

Seve is a great benchmark for all the Spanish athletes who have been fortunate to meet him. I wish him well
--Tennis No. 1 Rafael Nadal
RELATED TOPICS

The news came during the Spanish Open in Barcelona, one of the European Tour's founding events and a tournament that Ballesteros won in 1981 and 1985.

Ballesteros met with his close friend and former European Ryder Cup teammate Jose Maria Olazabal before it teed off this week, according to the UK Press Association.

"Seve's physical condition was not good when Jose Maria went to see him, but they talked about golf and everything," Olazabal's manager Sergio Gomez told PA on Friday.

"Then came the call yesterday to tell him that Seve was in a critical condition."

"Seve is a great benchmark for all the Spanish athletes who have been fortunate to meet him and play golf with him. I wish him well," the world number one said in quotes reported by AFP.

"Life is cruel sometimes, he's had a struggle in recent years but he's still been able to do things. His foundation is an example for society and all athletes."

Ballesteros made his name when he finished second at the British Open as a 19-year-old in 1976 and that year went on to win the European Tour's money list for the first of six times.

He won the British Open -- one of golf's four major tournaments -- three times, and was twice victor at the Masters in Augusta.

His triumph at the 1979 British Open made him the youngest winner of the event that century and the first non-British European to do so since 1907.

As well as his success in stroke play tournaments, Ballesteros was also a mighty competitor in the match play format -- winning the world title five times and helping Europe claim the Ryder Cup on four occasions against the United States.

He was also a victorious captain in 1997, the first year that the teams event was hosted by Europe outside of Britain and Ireland.

Meanwhile, South Africa's Thomas Aiken claimed a one-shot lead at the halfway stage of the Spanish Open on Friday.

The 27-year-old, seeking his first victory on the European Tour, shot his second successive four-under-par 68 at El Prat with a birdie at his final hole for the second day in a row.

Ranked 104th in the world, he ended the day ahead of Spain's Pablo Larrazabal, who carded 70 on his home course.

"I belong to another generation and never actually saw Seve play, but his fight these last years has been an inspiration for us all," Larrazabal, 27, told the European Tour website.

"Although I was too young to watch him perform when he was at the top, I have seen all his films, and he was really spectacular, never giving up, hitting his driver and chasing the ball into the hole from everywhere."

Miguel Angel Jimenez, a non-playing Ryder Cup assistant to Ballesteros in 1997, was tied for 27th on 143, while Olazabal was another shot back after also carding 72.