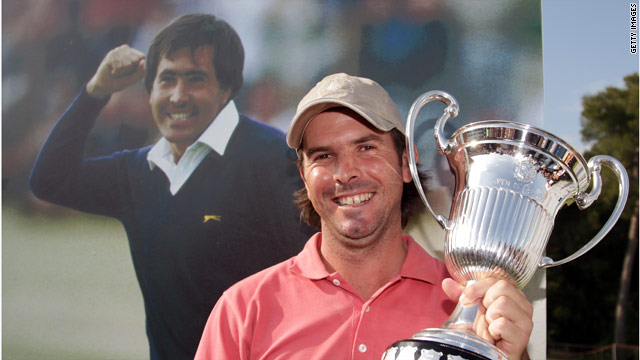 The death of Spain's Ballesteros Saturday cast a shadow over the tournament with the players observing a minute's silence during the third round action.

"It's been a sad week with Seve passing away," said the 27-year-old Aiken.

"I definitely want to dedicate this win to him with it being his home Open and what he gave to his home fans and to golf," he told the official European Tour website.

All the players wore black armbands on the final day as Aiken kept his nerve to earn South Africa their fifth win on the European Tour this season.

"I've been waiting for this for a long, long time and I've been knocking on the door. I'm ecstatic," he added.

Hansen broke out of a tie for second with a birdie on the final hole while Welshman Phillip Price and France's Gregory Havret both bogeyed the 18th to drop into a tie for fifth with Scot Paul Lawrie, England's Simon Dyson and David Horsey and Havret's compatriot Romain Wattel.

Jose Maria Olazábal, mourning the loss of his great friend and ex-Ryder Cup partner Ballesteros, bravely played the final round but shot a five-over 77 to finish on eight-over.