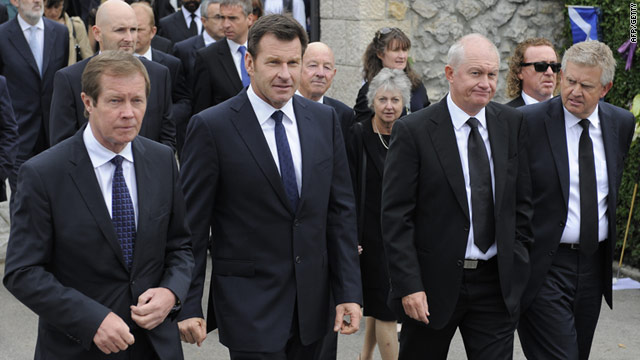 (CNN) -- Ryder Cup captains past and present joined family and friends of golfing legend Severiano Ballesteros Wednesday for the funeral in his hometown parish church in the northern Spanish village of Pedrena.

Ballesteros died Saturday from complications related to a brain tumor, his website said. He was 54.

The European Tour website said all of Spain's 422 golf clubs will observe a minute's silence, while the flag sticks at the Pro-Am of the Iberdrola Open in Majorca will have black ribbons attached.

Seve Ballesteros: One of golf's greats

A procession from Ballesteros' home to the nearby village church was led by a bagpiper. The golfer's three children came just behind, carrying an urn with his ashes. Ballesteros' website said someone also carried a three iron, the club he used when he started playing golf as a child.

Ballesteros won a record 50 tournaments on the European Tour before retiring in 2007.

Ballesteros first made his name as a 19-year old in 1976 when he finished second at the British Open -- one of golf's four major tournaments.

That year he also went on to win the European Tour's money list for the first of six times. His triumph at the 1979 British Open made him the youngest winner of the event that century and the first non-British European to do so since 1907. He was twice a victor at the Masters in Augusta.

As well as his success in stroke play tournaments, Ballesteros was also a mighty competitor in the match play format, winning the world title five times.

He helped beat the United States in the 1985 Ryder Cup to begin two decades of dominance and also led his team to victory in Valderrama, Spain, in 1997 -- the first year that the teams event was hosted by Europe outside of Britain and Ireland.

Ballesteros was diagnosed with a brain tumor after losing consciousness at Madrid Airport on October 5, 2008. He underwent surgery. In June 2009, he established the Seve Ballesteros Foundation to fight cancer.

"Seve stated that he wanted to be treated like any other neighbour during the ceremony," the family website stated.

After the funeral, his ashes were carried from the church back the family estate and placed next to a magnolia tree, Ballesteros' website said.