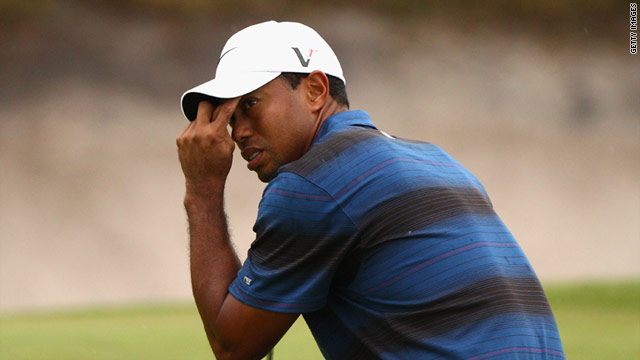 Tiger Woods has slipped down golf's world rankings due to prolonged absences and loss of form.
STORY HIGHLIGHTS

(CNN) -- Fourteen-time major champion Tiger Woods has announced he is to miss the upcoming U.S. Open through injury.

The former world number one, who is without a tournament win in 18 months, was forced to pull out of the Players Championship at Sawgrass in May after suffering knee and Achilles problems.

Woods' last major victory came at the U.S. Open at Torrey Pines in 2008, after which he underwent reconstructive knee surgery, but he announced Tuesday he is to miss this year's event at Congressional Country Club.

"I am extremely disappointed that I won't be playing in the U.S. Open, but it's time for me to listen to my doctors and focus on the future," Woods said on his personal web site.

"I was hopeful that I could play, but if I did, I risk further damage to my left leg. My knee and Achilles tendon are not fully healed. I hope to be ready for AT&T National, the next two majors and the rest of the year."

I was hopeful that I could play, but if I did, I risk further damage to my left leg
--Tiger Woods
RELATED TOPICS

Woods' recent run of form has seen him slip out of the top ten world rankings for the first time since 1997.

He hasn't won a tournament since he took a break from the game after revelations about his private life emerged.

The closest he has come to taking a title was a playoff loss to defending U.S. Open Graeme McDowell at the Chevron World Challenge last December.

The 35-year-old's injury problems were sparked by a sprain of his knee and a strain of his Achilles tendon during the third round of the Masters in April.

Woods then limped through nine holes at Sawgrass after aggravating his injuries on the first tee -- posting 42 on the front nine -- before withdrawing from the tournament.

"It's been a frustrating and difficult year, but I'm committed to my long-term health," Woods added.

"I want to thank the fans for their encouragement and support. I am truly grateful and will be back playing when I can."

Woods also took to Twitter to announce he would be missing his first U.S. Open since 1995 saying: "Not playing in US Open. Very disappointed. Short-term frustration for long-term gain."