By Will Tidey, CNN 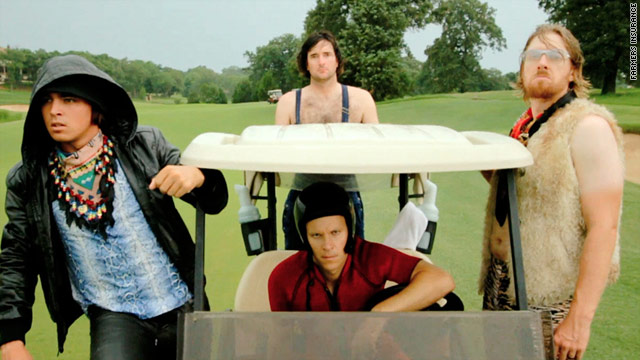 (CNN) -- For sportsmen to form a pop group is rare, for a boy band to be forged from a sport often criticized as being the stuffy reserve of boring old men is something of a miracle.

Not that the chances of future platinum-selling albums or world tours look particularly good for "Golf Boys," if the standard of their first release "Oh, Oh, Oh" is anything to go by.

Awkward dance moves, dubious costumes and with voices as thin as a sheet of paper; the foursome of Ben Crane, Bubba Watson, Rickie Fowler and Hunter Mahan are hardly The Beatles.

But the band -- who were created by world-ranked 44 Crane -- will not be disappointed if they fail to top the billboard charts because the quartet of PGA Tour players are singing and dancing for charity.

The group's debut track -- which is a throwback to the 1990s boy band heyday of New Kids on the Block, NSync and Backstreet Boys -- has so far proved an internet sensation attracting over a million views on YouTube since it went live on June 13.

In fact, three-times PGA Tour winner Crane, who was the driving force behind Golf Boys, has built a cult social media following over the last 12 months after uploading a host of comedy clips of himself.

Smash, bang, you got to hit the ball far. When the crowd goes ooooh, then you hear the oo-da-la-li-la-li
--Rickie Fowler, singing for the Golf Boys

In one the 35-year-old took time to make fun of his reputation as a slow player -- prompting the PGA Tour website to suggest he'd been transformed from the, "sultan of slow, to the lord of laughs."

"My image, amongst some of the golfers, is slow golfer, nice guy," Crane told the PGA Tour.

"So when friends go from slow golfer, nice guy to 'Wow,' it's like the perfect storm of my image to the videos, it's such a contrast. It's had more effect because of it."

And Crane's latest production was designed to take things to the next level. After securing funding from Farmers Insurance, Crane convinced Watson, Fowler and Mahan to make it happen. "We've got costumes, a studio rented and we're going for it. The boy band is coming back," he proudly stated in May.

Farmers Insurance came on board through their involvement with Crane, a player they sponsor and who won the PGA Tour tournament they host in California last year.

The timing of Golf Boys' debut release, during the 111th U.S. Open at Congressional Country Club in Maryland, only added to the hype. When the golfing world should be occupied with finding its next major champion, many will be talking about the Golf Boys' video -- and in particular the players' ridiculous outfits.

Watson is shirtless in a pair of denim dungarees; Mahan in skin-tight leopard print pants and an open fur coat. Crane sports what looks like a cut-off wetsuit, while Fowler is resplendent in leather pants and an open leather jacket.

The video opens with the foursome in staged boy band pose, before the camera pans in on each of their faces in slow motion. Then the choreographed dancing kicks in, with the players mixing studio moves with coordinated routines on the golf course.

By the time the golf-themed lyrics kick in you begin to wonder how the players managed to keep a straight face long enough to film it. "Chip, putt, you know, what's the big whoop? When I play my game, then I make my mama proud," sings Mahan.

"Smash, bang, you got to hit the ball far. When the crowd goes ooooh, then you hear the oo-da-la-li-la-li," continues Fowler.

Fowler's involvement is particularly amusing when you consider his status as America's pop star golfer elect. The 22-year-old has been labeled "the Jonas brother of golf", on account of his boy-band good looks, and he attracts hoards of admiring fans wherever he goes.

Quite what his role in Golf Boys will do to his appeal remains to be seen. While Crane's collective are clearly the first PGA Tour boy band, Golf Boys aren't the first professional golfers to try their hands at music.

Two-times major winner John Daly has been known to pick up a guitar and sing on occasion, and has even written his own material. It's surely only a matter of time before Golf Boys invite him along for a cameo.

"Crane has talked about the potential of future videos," admitted Toohey. And with that, it's off to watch his latest clip - "the making of Golf Boys". Oo-da-la-li-la-li.